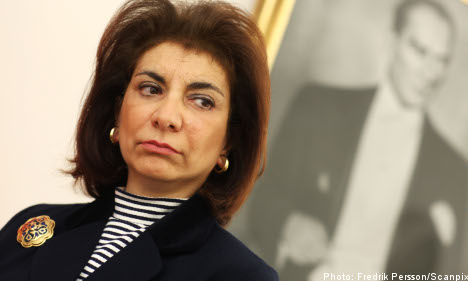 The Swedish parliament on March 11th recognised the massacres of Armenians and other ethnic groups during World War I as genocide, immediately sparking a diplomatic row with Turkey and prompting Ankara to call back its ambassador.

The Swedish government had opposed the resolution.

“We think it is a mistake to politicise history,” Bildt wrote on his blog.

“Unfortunately the decision of the parliament will not facilitate the process of normalisation between Turkey and Armenia, nor the work of a commission which should investigate the events of 1915,” he added.

A US Congress panel had branded the World War I massacre of Armenians as genocide a week before the Swedish vote, sparking a diplomatic row, with Turkey also recalling its ambassador from Washington.

Davutoglu said he was wary of sending the Turkish ambassador back to Washington as the two cases were different.

“The Swedes clearly apologised,” he said.

Armenians say up to 1.5 million of their kin were killed in systematic massacres during World War I as the Ottoman Empire fell apart. This version has the support of the main body of global research opinion.

Turkey counters that between 300,000 and 500,000 Armenians and at least as many Turks perished in civil strife when Armenians rose up against their Ottoman rulers and sided with invading Russian forces.