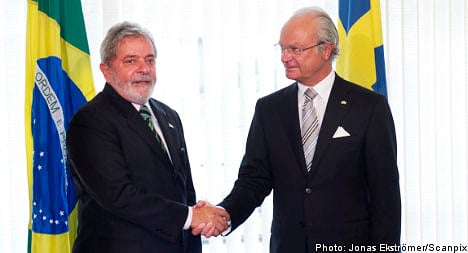 The deal to supply Brazil with sophisticated fighter jets was in its high-stakes final phase on Wednesday, with Lula under intense pressure ahead of his decision.

Brazilian officials say the contest should be decided by the end of next week.

Lula has already expressed a strong preference for France’s Rafale jet in the competition.

But he said after his meeting with the Swedish monarch that “the final reports have not reached me” and he could only make his decision once Brazil’s defence council had convened to give its recommendation.

The Brazilian president has already asserted that he would have the final word, and that his choice would be based on political considerations more than the technical merits of each aircraft.

“We want technology to build the aircraft in Brazil, and for Brazil to be an exporter of these jets,” he said.

That priority has appeared to sideline the US jet in the running, the F/A-18 Super Hornet made by Boeing. The Brazilian government has emphasized instances in the past when the US Congress has blocked Brazil from acquiring or exporting US technology.

The other two aircraft competing are the Rafale, an ultra-modern semi-stealth omnirole fighter made by France’s Dassault group, and Sweden’s versatile and easily maintained NG Gripen by Saab.

Brazil is looking to initially buy 36 new fighters, with an option to add nearly 100 more in the future.

The value of the deal has not been stated, but Brazilian media estimates range from four billion to $10 billion.

French President Nicolas Sarkozy has put his prestige fully behind the Rafale, issuing a joint statement with Lula last September saying Brazil was already in exclusive negotiations to buy the jet.

But in the teeth of opposition from Brazil’s air force, which is plumping for the much cheaper Gripen, Lula has had to backtrack and say the tender was still wide open.

His minister for strategic affairs, Samuel Pinheiro Guimaraes, wrote in the latest issue of a French defence journal that acquiring the Rafale would begin a “beautiful adventure.”

A technology-sharing deal would greatly advance Brazil’s scientific and trade prowess, he wrote, while the two-engine Rafale was suited to patrolling Brazil’s vast territory.

The head of Saab, Åke Svensson, told the Swedish news agency TT in Brasilia that Lula’s decision to base the selection on political aspects made it “very difficult to predict the outcome.”

He said that the Gripen had come out on top in the Brazilian air force’s price and technical evaluation, but that might not be enough to secure the deal.

If Brazil does go with the Rafale, it will be the first sale of the jet outside France.

French officials hope a Brazilian success could boost the Rafale’s chances in other tenders, including in India and Kuwait. Unconfirmed reports have suggested Dassault significantly cut its asking price to overcome reservations in Brazil.

Kuwaiti lawmakers have been watching the negotiations keenly, and on the weekend an Islamist bloc in Kuwait’s parliament warned its government against

a planned purchase of Rafales, deeming the deal “suspicious.”