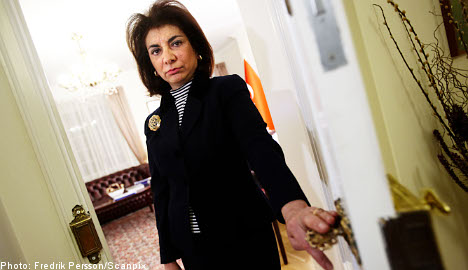 Speaking to reporters before her departure to Stockholm, Zergün Korutürk

said her return became possible after the Swedish government distanced itself

from the parliament’s decision.

Ankara still expects Stockholm to take steps to “compensate for this error,” she said. “I hope the Swedish government will do everything in its power.”

Ankara had announced last week that the ambassador would return to Stockholm soon.

Korutürk was summoned back to Ankara on March 11th after the Swedish parliament voted by a narrow margin to recognise the Ottoman massacres of Armenians during World War I as genocide, despite the government’s advice not to do so.

The Swedish vote came in the footsteps of a March 4th vote by a key US Congress panel that branded the massacres as genocide, also prompting Ankara to recall its ambassador there.

Last week, Turkish Foreign Minister Ahmet Davutoglu indicated that he was not yet ready to send his ambassador back to Washington as the two cases were different.

“The Swedes clearly apologised,” he said.

In a telephone conversation with US Secretary of State Hilary Clinton at the weekend, Davutoglu urged the US admininstration to block the bill, saying it was “critical” to bilateral ties.

Armenians say up to 1.5 million of their kin were killed in systematic massacres during World War I as the Ottoman Empire fell apart.

Turkey categorically rejects the genocide label and says between 300,000 and 500,000 Armenians and at least as many Turks perished in civil strife during the chaos of war.