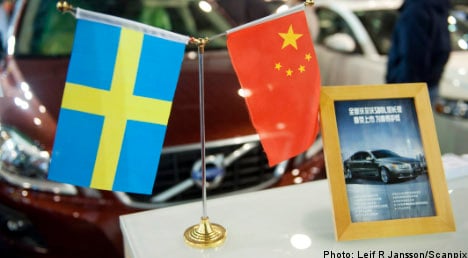 Zhejiang Geely Holding has agreed to pay $1.8 billion dollars for Volvo from Ford Motor Co in the biggest overseas acquisition by a Chinese carmaker, propelling Geely into a market dominated by Audi, Mercedes-Benz and BMW.

“I think if they do things properly and maintain the Volvo image in China and don’t mix it with the Geely brand, I think they have got a very big chance to be successful here,” said John Zeng, an analyst at IHS Global Insight.

Geely will spend $2.7 billion on the takeover – the original price tag plus $900 million in working capital – to turn around the loss-making Swedish carmaker recognised for sturdy family-friendly vehicles.

Better known for making cheap small cars, Geely has been at pains to reassure drivers around the world that the two brands will remain separate.

Geely plans to keep Volvo manufacturing plants in Sweden and Belgium and is considering opening factories in China, the world’s biggest auto market.

“Volvo will retain its own distinctive features and will… continue to develop in the top luxury car sector,” Geely chairman Li Shufu said Tuesday after flying back from Sweden, where the deal was signed at the weekend.

“Relations between Geely and Volvo in the future will be like brothers, not father and son. They will respect and support each other and grow together.”

The deal, which US auto giant Ford initially agreed to in December, includes agreements on intellectual property rights as well as supply and research and development arrangements between Volvo, Geely and Ford.

Volvo will give Geely the “perfect platform” to improve its own product line and enhance its image in China, where it has struggled to make an impact, said Jerry Huang, a Shanghai-based analyst with research firm CSM Worldwide.

Geely has become one of China’s largest private carmakers since launching its auto manufacturing business in 1997. It has an annual production capacity of 300,000 cars, but has sold less than 200,000 units abroad since 1997.

“There is quite a big gap between Geely’s product line and brand awareness and those of Volvo’s,” said Huang.

“Geely gets a platform to learn and gain experience in the industry.”

Geely vice-president Zhao Fuquan likened the relationship between Volvo and the Chinese carmaker to that of teacher and student.

“Volvo as a top brand in the world has accumulated enormous technology know-how,” Zhao said at Tuesday’s press conference in Beijing with Li.

“It is a strong resource for Geely and we will learn actively as a student to improve ourselves.”

Geely is expected to use Volvo to tap the lucrative government procurement market for cars, estimated to be worth 100 billion yuan ($14.7 billion) this year, analysts said.

Beijing requires Chinese brands account for no less than 50 percent of government vehicles.

If more bureaucrats are seen driving Volvos instead of Audi sedans, it could enhance the image of the Swedish brand among China’s increasingly wealthy middle class, Zeng said.

“You can see the Volvo S80 becoming a strong competitor for the Audi A6 in terms of government procurement,” Zeng said.

“The luxury market is growing very fast. China is the largest market for Audi, and Mercedes-Benz and BMW also record very fast growth in China.”