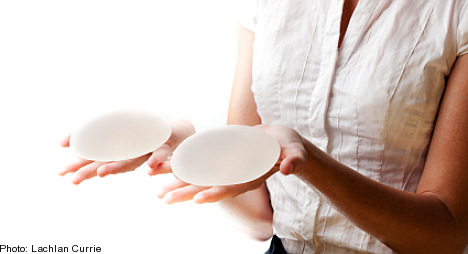 The agency confirmed on Thursday that it has followed the lead of the French authorities to ban the products manufactured by Poly Implant Prothese (PIP).

Since 2001 it is estimated that the breasts of around 35,000 to 45,000 European women have been augmented with the faulty implants. There are no firm figures for how many Swedish women may be affected, while in France around 1,000 women are set to be offered alternatives.

“This is the type of information that we are trying to find out. We hope to be able to release information as soon as possible,” said Staffan Strömberg at the agency.

But despite the agency ban on the product, Stromberg argued that he does not see any reason for Swedish women equipped with the implants to be overly concerned.

The PIP implants were outlawed by the French drug administration after a slew of reports that they had a tendency to burst due to an erroneous mixture of silicone.

The products will now be recalled from the Swedish market, and clinics in the country will be forbidden from using them.

“It is a cut price product which does not fulfil our quality standards,” he said.