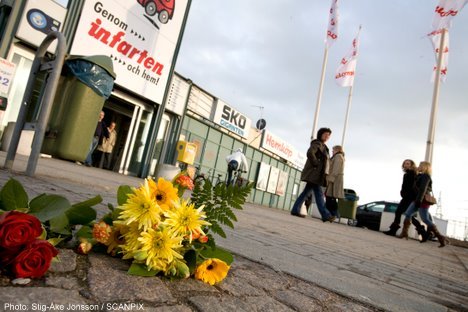 The suspect was interrogated on Friday afternoon and the prosecutor is expected to determine whether or not there are sufficient grounds to arraign him.

“We are unsure of how the prosecutor will weigh the evidence,” detective Tommy Lindén told TT news agency.

The 23-year-old man is the fifth suspect who has been brought in for questioning involuntarily.

Lindén said that the other suspects are the man’s friends and relatives.

The 23-year-old was identified based on witness testimony.

“We were able to encourage people to come forward and testify,” Lindén said.

The original charges include aggravated assault and involuntary manslaughter after the woman died. Police have since upgraded the crime to murder. “But that can change again,” Lindén said.

Earlier on Friday he described the investigation as extremely difficult.

“There has to be someone in Landskrona who will come forward and tell us what they know. It all depends on someone telling the truth. We know that someone has lied,” he told TT.

On Thursday, police impounded a car found in Landskrona.

“It might be the car used by the attacker. But we don’t know that for sure, it may have been another vehicle,” Lindén said.

Police questioned the owner of the car on Thursday. The man in question is in his thirties. Police declined to comment on what information he might have revealed.

The car, a red Mazda 323, is now impounded in a police garage in Helsingborg for forensic processing, which Lindén says may take “two or three days.”

A 36-year-old and a 27-year-old were also questioned about the crime on Thursday. Both are local residents and provided useful information. Neither are suspects in the case, Lindén said.

He did not provide details on what the men said, but both are believed to have been in the parking lot when the elderly woman was assaulted.

Helsingborg prosecutor Göran Olsson will be reviewing the case, according to police.

The Skåne police department hopes to resolve the case over the Easter weekend.

“It’s going to be all-nighters for us. We have brought in extra staff over the weekend and are firing on all cylinders to solve this,” Lindén said.

The 78-year-old woman lost consciousness after she was punched in the face while trying to intervene on behalf of her 71-year-old partner who was being attacked by a man in a parking dispute.

After surgery at a neurological surgery unit in nearby Lund, her condition improved slightly before worsening again on Tuesday afternoon. She died in her hospital bed at around 4pm on Wednesday with relatives consenting to end her treatment after doctors said they were powerless to restore her to health.

A group of Landskrona businesses offered a reward of 40 000 kronor ($5,500) for tips leading to the arrest of the attacker. A demonstration against violence is planned in Landskrona on Monday.