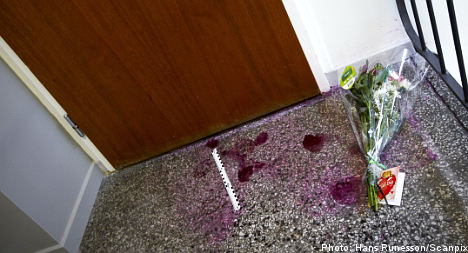 “Her psychological condition has deteriorated since she was arrested,” prosecutor Anna-Karin von Schoultz told Aftonbladet.

A medical examination on Tuesday afternoon will determine if the suspect can continue to be held in custody or whether she should be transferred to a local hospital.

The woman is believed to have known a 41-year-old man murdered on Sunday but had no apparent connection to a 70-year-old victim. Her DNA is also to be tested in connection with a five-year-old murder case in Gothenburg.

Police on Monday confirmed that the woman knew the 41-year-old.

“They knew each other, but I don’t want to go into how close they were acquainted, and we don’t really know anyway,” Stefan Karlsson at Växjö police told journalists on Monday.

Police have as yet been unable to establish a connection between the woman and the murdered 70-year-old and no motive has been established.

The 70-year-old man was found on the third floor of the apartment block outside the door to his home, with stab wounds to the body.

“He managed to call the ambulance himself,” Stefan Karlsson said.

The man was rushed to Växjö hospital where they immediately operated on him, but could not save his life.

“The police could not interview the man before the operation due to his injuries,” Stefan Karlsson said.

Police confirmed that the female suspect is not registered at the apartment where the 41-year-old man was found dead on Sunday. But according to the Aftonbladet tabloid, her name is on the door, although no one in the building was able to confirm having seen her.

The 70-year-old was found around 90 minutes later.

The woman is reported to have told passengers on a local Växjö bus that she had murdered two people, a story that she has not repeated to police in interviews.

“During the interrogation, she elected to decline to answer any of the officers’ questions,” said Stefan Karlsson.

According to Karlsson, the woman is not feeling well and has given a very confused impression.

Police are now hopeful that a five-year-old murder in Gothenburg will also now be solved.

A female store assistant was stabbed to death in a sewing shop in Gothenburg city centre at closing time on a Thursday in October 2005. Witnesses have described a mysterious woman in pink trousers and dark jacket, but police have been unable to locate her and no other tips have been received.

Traces of the unknown woman’s DNA were however found at the crime scene and police in Växjö and Gothenburg are now waiting to see if there is a match between the crimes.