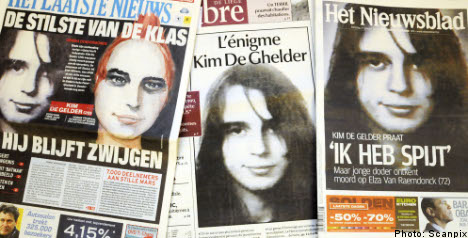 Angelina Elander, a 40-year-old singer and artist from Luleå in northern Sweden, has featured in a series of reports in Flemish and French language media sources which describe her as the “lover” and “admirer” of De Gelder, the 21-year-old man who killed three and seriously injured six more in an attack on a nursery in the town of Dendermonde in January 2009.

Elander is reported by Belgian newspaper La Capitale to have penned a slew of letters expressing her affection for the convicted killer, going as far as to submit an application for employment at his Bruges prison.

On her blog, Kosmonaut Planemo, Elander has published her letters and other material pertaining to the De Gelder case and she is also reported by La Capitale to have opened a petition to free the killer.

Passages cited by the commercial Flemish television channel VTM include:

“Oh, my darling. Did you really do all this pour moi? You shouldn’t have. *blushing* I feel harmony. I feel at peace with the universe. I think my boobs have grown.”

In other texts she tells the 21-year-old Kim De Gelder to remain true to her and expresses a hope that he is faring well in prison.

Swedish police poured cold water on reports that the Belgian authorities have contacted them with regard to the case.

“I can confirm that we have received no such request from the Belgian police,” Anna-Lena Hesse at Norrbotten police told The Local on Tuesday.

The phenomenon of women developing infatuations with convicted criminals is sometimes referred to as the Florence Nightingale Syndrome which is used to describe the situation in which a nurse falls in love with a patient (or vice versa), motivated by some sort of biological caring instinct.

The Local spoke to Jenny Palm, who is currently researching a book on the phenomenon of woman developing infatuations with convicted criminals and who rejects this hypothesis.

“My research points overwhelmingly to more carnal motivations such as sex and excitement, and finds no basis for the theory that this concerns some form of caring instinct,” she said.

Palm explained that while she is not familiar with the De Gelder case, her research indicates that women from all walks of life can be involved in the phenomenon, and do not necessarily have to be suffering from psychological problems.

“The women I have spoken to are in full control of their faculties. They can be nurses, but they can also be lawyers and from other professions and social classes. They do all have a few things in common though – turbulent childhoods and very low self esteem,” Jenny Palm explained.

The Local has sought Angelina Elander for a comment.