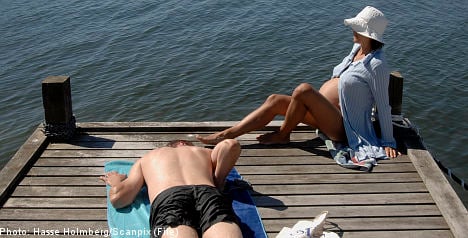 The simple urine test can uncover the risks faced by pregnant women for contracting the condition as early as during week 14 of a pregnancy, the Svenska Dagbladet daily reports.

Researchers at the biomedical centre at Lund University Medical Faculty have identified two substances – foetal haemoglobin and Alpha-1 microglobulin – which can be measured in the blood several months before the first symptoms emerge.

The method has been tested in blind studies on 96 English women with genetic tendencies towards a high risk for toxaemia. The Lund researchers were able to establish with a 90 percent certainty which of the women would suffer from the condition.

The researchers have also developed a possible treatment for the illness.

The Alpha-1 protein, which is used by the body to protect against injury, can also be used to treat the sick women, preliminary tests have shown. When injected into the the placenta all traces of toxaemia were found to have disappeared.

Pregnancy toxaemia or pre-eclampsia is a condition which affects around two percent of pregnant women in Sweden. The condition is accompanied by high blood pressure and protein in the urine and can harm the transfer of nutrients from the placenta to the unborn child, causing stunted growth.

More serious cases can lead to seizures (eclampsia), cerebral haemorrhaging, several other serious conditions and even death, but that is very rare in Sweden due to regular pre-natal checks.