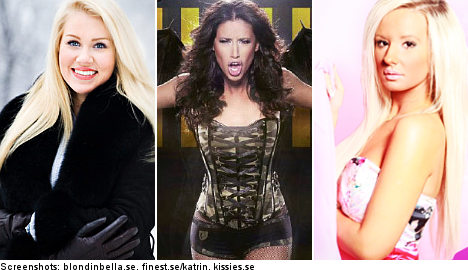 The three-pronged counterattack comes after the Tax Agency announced it planned to examine presents given to some of the country’s biggest bloggers in return for advertising.

“We’ve been interested in this activity [blogs] for a few years now since we feel there are incomes that should be taxed. So far there haven’t been any legal cases or tax disputes but we are going to examine this year’s declarations to see how bloggers have managed their incomes,” said Karin Andersson at the Swedish Tax Agency (Skatteverket).

But the bloggers — Katrin Zytomierska, Isabella “Blondinbella” Löwengrip och Alexandra “Kissie” Nilsson — have now called on the agency to “cancel the witchhunt” in a jointly penned article published on NewzGlobe.

“There’s no law saying we should pay tax for the gifts for we receive. So, end of discussion.”

Karin Andersson sees things differently, however, suggesting the discussion may have just begun.

“We don’t see these as presents and gifts. They may be regarded instead as payment bloggers receive for work they have done, since they write about the products and thereby serve to advertise them,” she said.

The bloggers counter that they receive countless products on a regular basis, many of which are entirely irrelevant to their interests.

“In 90 percent of cases, the products that are couriered to us, mailed to us, or hung on our front doors are just crap that we’re not in the least bit interested in. Generally it goes straight into the waste basket. Are we to pay tax on that too?”

The Tax Agency conceded that there were certain exceptions to the general rule that the products the bloggers received should be considered a form of payment.

“A one-off gift worth less than 225 kronor ($31) doesn’t have to be declared. But if a company routinely sends products which, when taken in isolation might not be worth that amount, then it must be declared. If you’ve received products that you can’t reasonably be expected to use, then that too may constitute an exception,” said Karin Andersson.

The three women take up three of the top four places in Bloggportalen’s list of Sweden’s most popular “professional bloggers”. Kissie currently attracts a whopping 1.1 million unique visitors a week, followed by Blondinbella in second with more than 500,000 and Katrin Zytomierska in fourth with 265,000.