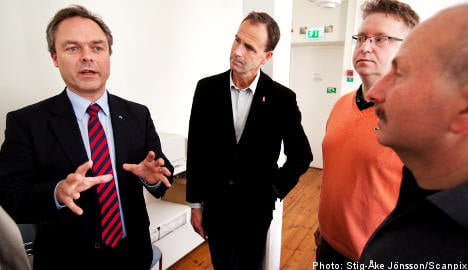 The Liberal Party chief said city leaders needed to do more to tackle the problem after police statistics showed a doubling in 2009 of the number of hate crimes registered against Jews.

“The fact that Jews are choosing not to continue living in Malmö creates unpleasant historical associations. It’s a worrying situation,” said Björklund.

The minister laid part of the blame for developments in Malmö at the feet of Mayor Ilmar Reepalu (SocDem), who Björklund said had made ill-advised comments that had fuelled anti-Jewish sentiment in the city.

The meeting with Björklund was one of several the Jewish Community has had of late with top Swedish politicians.

Community members told Björklund about Jewish children who did not feel safe at their pre-schools and families who had elected to leave Malmö to escape persecution and harassment.

Fredrik Sieradzki spoke of a rabbi who is subjected to harassment on an almost daily basis.

“This can be in the form of verbal attacks and threats. It has also happened that he has been chased.”

The community previously felt its concerns were met with silence from city leaders.

“But now I think the message has been received,” said Jehoshua Kaufman.

Speaking to The Local in January, Fredrik Sieradzki said elements on the far-left and a “very small segment” of the city’s growing population of Muslim immigrants from Arab countries in the Middle East are responsible for growing anti-Semitism.

“This is a small group of extremists who have decided to go after Jews wherever they are in the world and regardless of their relationship to Israel,” he said.