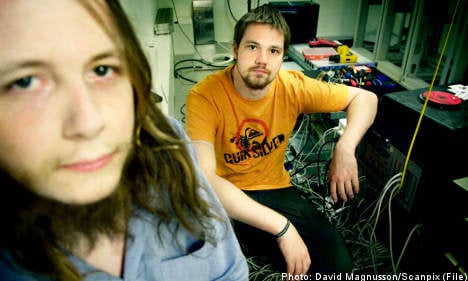 Columbia Pictures, Disney and Twentieth Century Fox are among the firms seeking 500,000 kronor each from Fredrik Neij and Gottfrid Svartholm Warg who they claim remain key figures behind the site.

Neij and Svartholm Warg, together with Peter Sunde and Carl Lundström, were found guilty of being an accessory to copyright violations and issued with a collective fine of 30 million kronor ($4.17 million) as well as a year in prison.

The Pirate Bay four have appealed the Stockholm District Court decision with the case likely to go all the way to the Supreme Court because of its precedential nature.

The Pirate Bay has in the meantime continued operating and, in a ruling from Stockholm District Court in October, Fredrik Neij and Gottfrid Svartholm Warg were ordered to pay 500,000 kronor fines if they did not close the site.

The film companies have now joined a previous call from music industry giants Universal, EMI, Sony and Warner Music to demand payment of the fines as they are not satisfied with steps taken by The Pirate Bay to shut down their BitTorrent tracker function.

In his appeal of the court’s ruling, Svartholm Warg claimed that the fines are redundant if the tracker is down. Peter Sunde has also commented that the change leaves only the file sharers themselves responsible for their actions.

But Monique Wadsted, the lawyer representing the film companies in their application to the court argues that the changes are only cosmetic and that The Pirate Bay website still provides comprehensive links to uploaded torrents.

“This change has no impact on the file sharing service function,” she argues in the film companies’ petition.

A new survey carried out by the film companies indicates that only seven of the 109 torrent files named in the case had been taken off The Pirate Bay, all of which remained available via other sites.

The companies furthermore argue that Neij and Svartholm Warg’s claims to have no further role in the operation of The Pirate Bay are contradicted by several public statements made by the pair, including comments made in conjunction with the aborted sale to Global Gaming Factory.