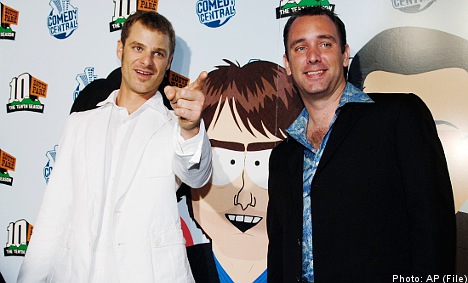 “Comedy Central has decided not to air these two episodes of South Park. It is a decision we’ve made with great reluctance. Comedy Central believes strongly in creative freedom of expression; when unique and deeply insightful creative talents like those behind South Park are able to express themselves freely, we all benefit.

“However, the safety of our employees is our unquestioned number one priority, and therefore we have decided to take these precautionary measures,” the broadcaster explained in a statement released to Aftonbladet.

Spokesman Peter von Satzgerl told the Svenska Dagbladet daily that the decision came as a result of “international directives” from the channel’s parent network in the United States.

The Muhammad joke formed part of a 200th anniversary episode screened in the US on April 14th, prompting threats of retribution from an Islamist group directed towards the notoriously irreverent show’s creators, Matt Stone and Trey Parker.

The warning, posted on the website revolutionmuslim.com and interpreted as a direct threat in much of the US media, cautioned Stone and Parker that they “will probably wind up like Theo van Gogh”, a Dutch filmmaker murdered in 2004 after making a film critical of Islamic society.

The pair appeared to heed the warning last week when the second part of the centenary show was aired, with the word Censored appearing after the Muslim prophet’s name was mentioned, and with the bear-suited Muhammad replaced by Santa Claus.

The first episode contained typically mocking depictions of several religious figures and assorted celebrities, with Buddha at one point being chastised by Jesus for snorting cocaine. It is not the first time that Muhammad and other religious figures have featured on the show, having previously put in an appearance in the fifth season episode Super Best Friends.

The 200th episode tells the story of a class action suit filed by all the celebrities who have been mocked on the show. Tom Cruise promises to end the law suit if the town can produce the Muslim prophet Muhammad.

The South Park townsfolk in the end decide to hand Muhammad over to a group calling itself the Ginger Separatist Movement, to avert a threatened bombing of the town.

The original broadcast of the show was watched by 3.33 million US viewers but, following the Comedy Central decision, Swedish viewers will now have to find other ways to access the controversial episode of the smash hit show.