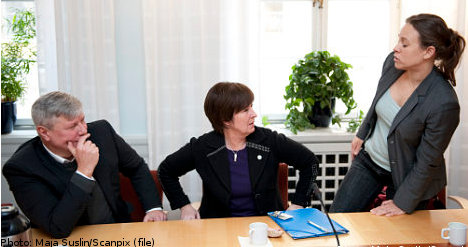 The gap between the two opposing political blocs has almost doubled, according to the April poll published in the Dagens Nyheter and Svenska Dagbladet dailies.

The Social Democrats recorded gains of 1.4 percentage points to 35.1 percent, the Left Party polled 5.6 percent, while the Green Party continued their climb, by 0.4 points to 10.6 percent – the highest figure since January 1996 and the only one of the three coalition partners that have improved their standing significantly since the 2006 election.

The Moderates advanced 1.3 percentage points to 28.8 percent, while the Liberal Party (Folkpartiet) dropped 1.3 points to 5.9 percent – its lowest figure in a year. The Centre Party polled 4.6 percent, and the Christian Democrats fell 0.8 points to 3.8 percent – under the 4 percent threshold required for parliamentary seats.

The far-right Sweden Democrats advanced 0.4 percent, landing right on the threshold at 4 percent.

In total the left-green coalition polled 51.2 percent while the centre-right claimed 43.1 percent.

The Synovate poll was conducted between April 12th-28th and is based on interviews with 2,677 people who were asked which party they would vote for if an election where held today.