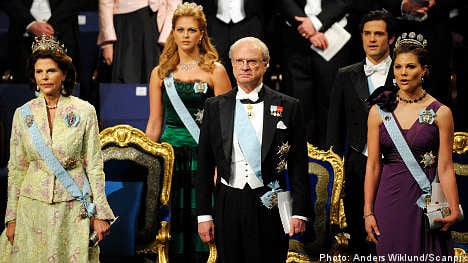 While support for the abolition of the monarchy has more than doubled over the past ten years, 58 percent of Swedes want to see the institution retained, according to the survey commissioned by the Swedish Republican Association (Republikanska Föreningen – RepF).

28 percent of those interviewed expressed a wish to see the back of the House of Bernadotte, twice the 12 percent polled ten years ago.

A greater number of people also think that the Swedish head of state should be elected democratically (44 percent) rather than inheriting the position (39 percent).

“The fact that more people want to see the head of state chosen democratically than by inheritance clearly shows that the Swedish people consider our constitution to be outmoded and undemocratic,” writes Mona Abou-Jeib Broshammar, the RepF chairperson, in a statement on Friday.

Broshammar underlined that the report clearly shows that the public and media debate can no longer be based on the presumption that the Swedish people love their monarchy.

The survey involved 1,000 people aged above 16-years-old and was conducted between April 15th and 20th – a period infused with speculation over the private life of Princess Madeleine and her then fiancé Jonas Bergström.