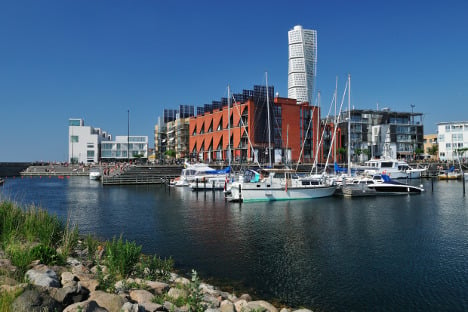 Right on the southern tip of Sweden, just across the Öresund strait from Copenhagen.

Malmö is almost emblematic of modern Sweden: cosmopolitan, multicultural and innovative. It has a long and distinguished history, which is reflected in its medieval town centre, yet few places have had to go through so much change over the past decade.

The significance of the Öresund Bridge cannot be underplayed. On a national scale it has further integrated Sweden into the rest of Europe by creating a land connection to the mainland. On the regional level it has merged Skåne and Zealand to create the now burgeoning Öresund region, to which Malmö is central. And finally on the local level it has brought two great cities closer together.

Far from being swallowed up by Copenhagen, Malmö has prospered and can hold its own with the two now complimenting each other in equal measure. Increasing numbers of Swedes now work in Denmark while more and more Danes are moving to Sweden. With a new underground rail link due to be completed in the coming years the ties between the two will only strengthen.

The economic benefits have been huge and have revolutionised the city. Shipping and heavy industry have been replaced by the IT and financial sectors, while the rapidly expanding university has attracted increasing numbers of foreign students and given Malmö a vibrancy not seen in many other Swedish cities.

However this is not the first time in Malmö’s long history that it has held such economic and strategic importance, and the city has a rich architectural heritage from previous periods of prosperity. Visitors will no doubt be attracted to Malmö’s quaint medieval town centre with cobbled laneways, canals and half-timbered houses. Malmöhus is the oldest preserved renaissance castle in Nordic region, and is surrounding by the impressive Kungsparken and Slottsparken. The grand Stortorget boasts elaborate 16th century architecture including the Rådhus (City Hall), while nearby Lilla torg is a pleasant and popular place for al-fresco dining and drinking. Gamla Väster may be less elaborate but its small colourful cottages are just as picturesque.

As Sweden increasingly opens up and integrates into Europe, Malmö’s geographical position has put it at the forefront of change. Immigration has led to Malmö becoming one of the most diverse and multicultural cities in Sweden. Unfortunately media attention has tended to focus on problem areas such as Rosengård, but a visit to Malmö will also reveal a cosmopolitan city that has accepted and embraced multiculturalism. This is best exhibited in Möllenvången, just south of the city centre, where Malmö’s ethnic mix is reflected in the wide range of restaurants and shops, and at times you can forget you’re even in Sweden.

But the greatest example of the change and prosperity Malmö has experienced is the futuristic Västerhamn district. What were once the town’s shipyards have now been converted into an ultramodern living and cultural space utilising innovative architecture and design. This is best exemplified by the Turning Torso, now Sweden’s tallest building, whose unique and eye-catching design makes it a worthy landmark for a city as progressive and innovative as Malmö has now become.

Take the train to Malmö

Direct trains from Stockholm, Göteborg and continental Europe…and connections from across Sweden and Europe.

For a complete timetable, please see:

This article was produced by The Local in cooperation with SJ.