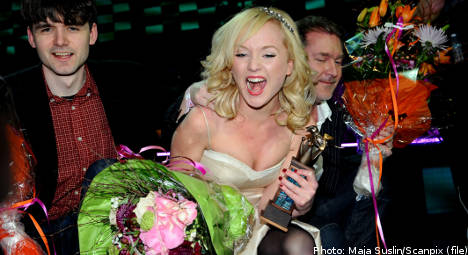 Bergendahl’s rousing ballad won the right in March to represent Sweden in the Eurovision Song Contest on May 29th in Oslo but the accompanying video has not proved as popular with the Swedish administration responsible for maintaining safety on the nation’s railways.

“We have had a discussion with them and we are happy that they have reacted and taken our complaint seriously,” she said adding that her colleagues are forced to act on almost a weekly basis as railway scenes are a regular feature in various media features and advertising campaigns.

Lionheart Music has replied that it “fully understands the administration’s criticism and concern” but rejects any assertion that the film encourages people to walk along the railway tracks and has no plans to withdraw the video.

“Anna Bergendahl’s enormous popularity after her victory in Sweden Melodifestivalen has made her a role model for many, first and foremost young people, and it is regrettable if the video to This is My Life could be misunderstood in any way,” the record company writes in a statement.

The company points out that the film was recorded on a privately-owned stretch of railway track under the strictest security conditions and has expressed a hope that the “video is seen as an aesthetic and polished production and appreciated as a music video and nothing else”.

“It is part of the administration’s work to encourage a high level of security and create understanding for the risks. While many of those we contact agree, few are moved to act as Lionheart have done to explain the artistic value of their work,” Bodil Sonesson said.