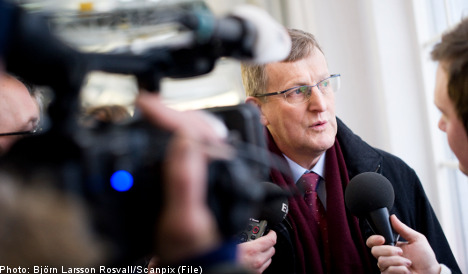 The newly reorganized Saab is steadily reducing its breakeven point and has more than enough cash to survive as it begins to rebuild sales, its chief executive officer said on Tuesday.

After a near-liquidation by former parent General Motors, Saab must rebuild its sales from scratch and is focused on restructuring its operations, said Jonsson.

“We had been closed down for seven weeks,” he told reporters in Detroit.

“We couldn’t order any material or do any advertising because we were in liquidation,” he said. “Now we have about 4,500 cars in inventory. We’re completely focused on getting our products out as quickly as possible.”

The company is currently living on reserves, including loans from the European banks and a $200 million technology deal with Beijing Auto.

But Jonsson said the storied Swedish brand should be able to break even in the second half of 2011.

While Jonsson hopes to reduce operating costs to the point where Saab can break even with annual sales of 80,000 to 85,000 vehicles, he said its potential sales are significantly higher.

Jonsson is confident Saab could sell as many as 125,000 units annually “at which point we would be quite profitable.”

“These are very conservative estimates,” he said, noting that Saab had sold 98,000 cars in 2008 when it was still owned by GM.

SAAB USA has built a staff, re-filled the pipeline to its 207 dealers and signed an agreement with what was then GMAC but is now Ally Bank, which is providing financing to Saab dealers and customers.

Saab is now in a position where it can offer lease deals to potential customers, Colleran said. In addition, Saab North America is launching its first sales promotion and is preparing a broad advertising campaign that will utilize print, online and social media.

The automaker’s US dealers have increased their orders for new vehicles, which is a sign of confidence in the new company and its plans for the future, Colleran said.

It expects to have the 2011 Saab 9-5 on sale in the United States by July and will slowly expand with other vehicles already in its product pipeline as it restarts its business around the world.

Saab has also developed a wagon version of the 9-5, which is due out next year, as well as a 9-4X crossover sport utility vehicle, which is being built for Saab by General Motors, Jonsson said.

The styling for the 9-3 hasn’t been frozen yet but it will be more sporty and aggressive than the current sedan model.

“Think aircraft,” said Victor Muller, CEO of Spyker Cars, which owns Saab. Muller said Saab has to be more distinctive to set itself off from other manufacturers.

The new Saab is also interested in developing a new compact or subcompact car, although it’s “not in the product plan yet,” said Jonsson.

Several other companies have come forward with offers to share technology,

which Muller said is “one of the big cultural changes in this industry since the crisis.”

Saab could wind up sharing a small car platform with another manufacturer, he suggested, though he declined to offer any specifics.

Saab also has ambitious plans to expand its presence in China, Brazil and Russia and eventually India.

“You could see the day when there are more Saab’s sold in China than in the US,” Jonsson said.