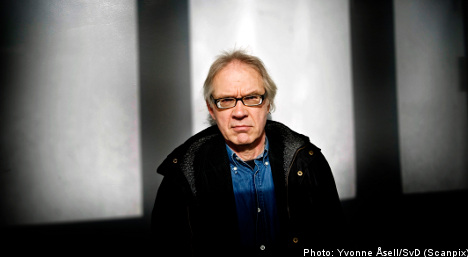 Instead of gaining access to the artist’s controversial drawing of the Muslim prophet Muhammad as a dog, which sparked outrage in parts of the Islamic world after its publication in Swedish newspapers in 2007, visitors to Vilks.net were greeted by a message from a hacker with the signature Al Qatari.

An aggressive greeting charging the artist with “still talking about the Prophet Muhammad”, is followed by a warning that the site will remain a target.

Lars Vilks was seemingly unperturbed by the cyber attack.

“I’m in touch with my webmaster, so I hope it will be fixed soon. But in any case, this is better than starting fights at academic lectures,” Vilks told news agency TT.

Vilks was assaulted on Tuesday while giving a talk at Uppsala University in eastern Sweden. An already heated atmosphere turned violent when Vilks showed a film of gay men wearing masks intended to depict the Muslim prophet Muhammad.

A man in the front row stormed onto the stage and attacked Vilks, head-butting him in the chest. Police quickly intervened and Vilks left the lecture theatre without suffering serious injury.

The incident was followed by tumultuous scenes as sections of the audience stood up, with some shouting “Allahu Akbar” (‘Allah is great’) while police used pepper spray to keep demonstrators at bay. Two police officers received minor injuries.

Three people, two men and a woman, were arrested before being released a few hours later. A further person was also detained and later released, according to police in the university city.

A new group on social networking site Facebook entitled “Mörda horungen (Lars vilks)!!!” (‘Murder the son of a bitch (Lars vilks)!!!’) had attracted hundreds of followers by Wednesday before becoming a private group and removing the word ‘murder’.

In March, an American woman known as “Jihad Jane” was charged by US authorities with conspiring to kill Vilks after seven suspected co-plotters were arrested in Ireland.