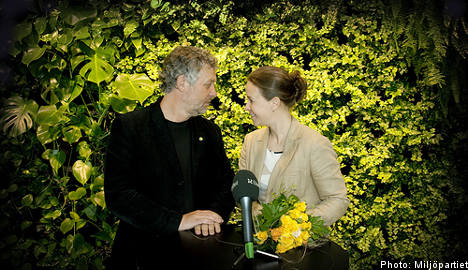 The party emphasised these issues would remain their top focus should the Red-Green coalition consisting of the Green Party, Social Democrats and Left Party form the government after the upcoming elections.

Those priorities rank higher than increasing unemployment benefit levels and making other restorations to the unemployment insurance fund and health insurance, according to party leadership.

“If the crisis in the euro area weakens recovery, it will require more extensive policies for jobs,” said spokesman Peter Eriksson at a press conference. He stressed that rises to unemployment insurance rank second to preventing the southern European crisis from spreading.

Spokeswoman Maria Wetterstrand spoke optimistically of the party’s prospects for the autumn election as she addressed the 248 delegates.

“As Britain has elected its first Green Member of Parliament, Sweden will have its first Green ministers in government in 2010,” said Wetterstrand. “In another year, my friends, the Green Party will confidently ensure a greener Sweden will emerge. We have broken ground on an historic rail programme and we have plans for more profitable small businesses and decent sick benefits insurance.”

The Green Party has announced that it proposes introducing an “entrepreneur year.” Under the scheme, people would be able to test their business ideas for a limited period while receiving financial support from the state. If they are unsuccessful, they can return to their old jobs, the party announced at its congress on Friday.

The proposed entrepreneur year is a variant of a sabbatical year, a policy introduced under the last Social Democratic government, which allowed people to take up to a year off work while receiving government benefits. The purpose was to allow an unemployed person to cover for the person taking a sabbatical year, thus gaining work experience.

Eriksson said the party would like to reintroduce sabbatical years in the long run, but favoured the entrepreneur year as an immediate measure:

“It is not as free,” Eriksson said in response to what distinguishes an entrepreneur year from a sabbatical year.

Eriksson believes that there can be a discussion on the party executive’s proposal that parental leave should be divided into three equal parts: one-third each to be taken by each parent and the remaining third decided between the parents.

According to the spokesmen, it is important for gender reform that father take more days off. If father do not take more voluntary days off during parental leave, politicians must act, Eriksson said.

“If they do not act fast enough, it is politically responsible to make decisions and not hide behind saying, ‘People can do what they want,'” he said.