Lawyer Fredrik Lindberg added that he will press for a comprehensive psychiatric examination at the remand hearing.

“There have been reports saying that he may have a serious mental disorder,” said Lindberg. “He has no official diagnosis, but it is possible that he suffers from Asperger’s syndrome.”

Lindberg did not go into detail about the origin of the information on the possible link to a mental disorder.

Asperger’s syndrome is a diagnosis in psychiatry and an autism spectrum disorder. Those with Asperger’s display significant difficulties in social interaction, along with restricted and repetitive patterns of behavior and interests.

The man’s 12-year-old half-sister, 15-year-old half-brother and their 49-year-old father were murdered with an axe in Härnösand, 400 kilometres north of Stockholm. Their bodies were found early on Tuesday evening at the house where the two younger children lived with their mother and her new partner.

Two other people initially arrested in connection with the killings – the man’s 63-year-old father and the 62-year-old partner of the murdered children’s mother – were released without charge.

Lindberg disagreed with police that his client planned the attack against his half-siblings and their father.

What motivated the man to kill his three family members is not clear, he said.

“It is still shrouded in mystery,” said Lindberg.

The suspect was remanded in custody on Friday and a remand hearing was held at the Ångermanland District Court in Härnösand at 1pm. When the remand hearing began, the suspect admitted the charges of murder through his lawyer and did not contest the application to remand him. After a brief introduction, the hearing continued behind closed doors.

“I will probably insist on it for the sake of the investigation,” said deputy chief prosector Bertil Månsson. “The man has indeed admitted to the crime, but there are a lot of things we will want to hear about him later on, especially about the motivation behind the crime, I can imagine.”

In the remand petition, Månsson wrote that the man is suspected on probable grounds of murder in Härnösand on May 11th.

The man has provided DNA samples to the police. The sample will then be compared with DNA traces from unsolved criminal investigations in Sweden, including a double murder in Brattås outside Härnösand in May 2005.

“Since there are DNA traces from Brattås, we will check them against this man’s DNA,” said Börje Öhman, information officer of the Västernorrland police authority.

In the Brattås murder, a 70-year-old man and a 57-year-old woman were killed.

The police expect results from the DNA test for the Brattås case at the earliest on Tuesday, but probably at the end of next week. 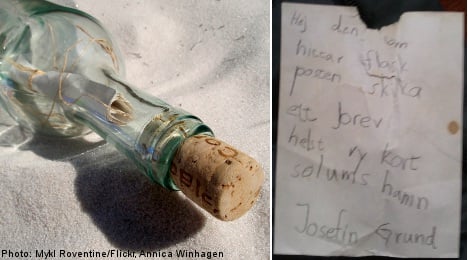 “It was a quake between 2.5 and 3.0 on the Righter scale,” said Reynir Bödvarsson at the Seismological Institute in Uppsala, to news agency TT.

Hans Lindahl at the emergency services in Härnösand told of a loud noise.

“First we thought that someone had driven a car into the station, in the brick wall at the side. Then people started to ask if we knew what it was. One called from home and said that it was shaking so much that he though the tiled stove would collapse,” he said.

No material damages were reported and despite the quake, calm has returned, Lindahl said.

“The strange this is we haven’t heard anything from the epicentre which lies around 20 kilometres west of the city.

The National Rail Administration (Banverket) has been conducting explosions in the area and people have perhaps mixed the earthquake with the tunnel explosions.”

According to Reynir Bödvarsson earthquakes of this magnitude occur about once a year in Sweden. Earlier this year Umeå experienced an earthquake.

“The coast of Norrland is one of the areas where we have the most earthquakes. But it is first when the scale hits five that there can be major damages. That happens about once every 100 years in Sweden.”