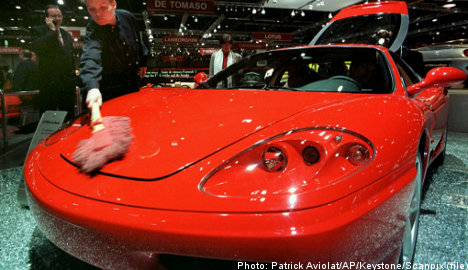 The Ferrari 360 Modena driven on the Anderstorp racetrack flipped about a dozen times before it caught fire. The driver escaped virtually unscathed. The driver was taken to hospital as a precaution.

“He’s OK. He had some pain in his back, but nothing important,” Stefan Bernström, event manager at the track, told The Local. “The passenger is all OK. He just stepped out of the car. It was not a standard Ferrari with two seats, but a racecar.”

The incident took place at 2pm on Monday during an event arranged by a Danish company. The buyers of about 20 Ferrari cars had been invited to the event to test the prized vehicles.

“I’m not sure how much the insurance is on these cars, but it’s a fantastic amount, about 2 million kronor ($262,830), really expensive cars,” Bernström told The Local. “For people who can afford it, it’s a very nice car. I was relieved of course to hear he was all right. As long as no one gets hurt, you can always buy a new car.”

The staff and organizers were able to put out the fire themselves.

“The guy driving is a very experienced driver. He’s been doing this for years. Something happened with the car,” Bernström told The Local.

“He had a tyre explosion on a front wheel at the end of the straight,” he said.

Bernström added the staff at the racetrack are trained to handle crashes.

“I didn’t see the crash because my office is on the other end of the racetrack from where the crash happened,” he told The Local. “I was helping putting out the fire. We got a call saying we needed an ambulance and fire extinguishers.”