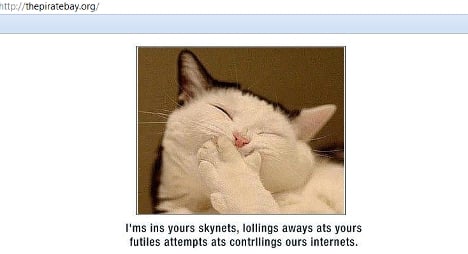 “We got tired of Hollywood’s cat and mouse game with The Pirate Bay and have decided to offer the site bandwidth ourselves,” Rick Falkvinge, leader of the Pirate Party, said in a statement on Tuesday.

“It is time to take the bull by the horns and stand up for what we regard to be a legal activity. When other parties appoint enquiries and avoid accountability the Pirate Party takes responsibility and acts with its own resources for the nation’s information security and freedom of expression,” Falkvinge said.

The Pirate Party is providing bandwidth for the webpage and search engine of The Pirate Bay while the tracker and torrent files previously listed on the page are located on other servers at undisclosed locations across the world.

“The Pirate Bay is a search engine, and as such is not responsible for the results of a search,” Rick Falkvinge argued.

The Pirate Bay meanwhile offered a typically defiant response to continued entertainment industry efforts to curb illegal file sharing through the courts, with a “lolcat” message on its reopened site parodying “yours futiles attempts ats contrllings ours internets (sic)”.

The Pirate Bay was closed down late Monday after German internet service provider Cyberbunker decided to comply with a preliminary decision by a Hamburg court under the threat of substantial fines. The Pirate Bay returned to service at around 11am on Tuesday.

The Pirate Party (Piratpartiet) was founded in 2006 and strives to reform laws regarding copyright and patents. The party claimed 7.13 percent of the vote in the 2009 European Parliamentary elections and currently holds two seats.

Four men linked to The Pirate Bay – Carl Lundström, Gottfrid Svartholm Warg, Fredrik Neij and Peter Sunde – were convicted by Stockholm District Court of being accessories to copyright violations in April 2009. Their appeals court hearing is due to open in September.