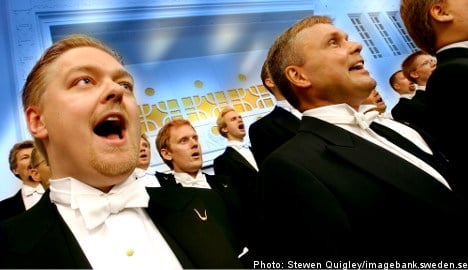 Previous studies have demonstrated the beneficial psychological and biological effects of singing, with associated feelings of relaxation, energy and joy. An inter-university Swedish study has set out to test whether there were any additional stress-related benefits from choir singing in comparison with other group activities.

Singing has been found to stimulate elevated oxytocin concentration in serum, and the study hoped to shed light on whether choir singing can aid anabolic regeneration, measured from saliva testosterone, and ease the symptoms of IBS, whose sufferers typically register low levels of oxytocin.

The researchers – Töres Theorell, Christina Grape, Britt-Maj Wikström, Rolf Ekmand and Dan Hasson – have published their findings in an article in the medical journal Psychotherapy and Psychosomatics, and have found that regular choir singing can increase levels of saliva testosterone and thus have an anabolic regenerative effect thus reducing stress.

“It is documented that starting activities can help to accelerate the body’s process to regenerate cells, which is fundamental to the health. What we have found it that choir groups show a clearly heightened regeneration in comparison to other activities,” said Professor Töres Theorell at the Stress Research Institute at Stockholm University to The Local on Wednesday.

While the effects did not last beyond the halfway mark of the year-long study, Theorell explains that the effects were significant enough to be relevant and warrant further study.

“We would love to look at what would happen at workplaces, and the impact on the general health of staff, if cultural activities were introduced and encouraged,” Theorell told The Local.

The researchers elected to invite applicants with a verifiable IBS diagnosis to take part in the study which was funded by the Swedish Research Council. A random sample was then selected and allocated to a choir group meeting or an information discussion group meeting, which took place weekly for a year.

“The IBS group was selected because it is a clear group with clear symptoms but the tests to measure health benefits could as well have been applied on other groups,” he said.

The saliva testosterone concentration was assessed by means of the Spectria RIA, which is a coated-tube immunoassay for testosterone developed by Finish firm Orion Diagnostica Oy.

“Saliva testosterone concentration during the waking hours of the day from the choir singers showed an increase after 6 months, when compared to before the interventions,” the study shows.

The researchers concede the need for replication in larger studies, but point out that there is a clear indication that choir singing can have a positive effect during the first half-year with IBS patients, with the most likely interpretation being the intervention itself.

“We know that choir singing is popular already and it is possible that the group effect is stronger in this type of activity,” Töres Thorell said.

The issue of cultural activities and health has attracted increasing attention in Swedish and international research circles in recent years.

A study by Karolinska Institute has shown that choir singers have heightened levels of the feelgood hormone oxytocin and Nobel prize winner Arvid Carlsson’s discovery of dopamine laid the groundwork for research into how the brain’s reward system works and thus, for example, the effects of music on stress levels.

Carlsson joined forces with the molecular biologist Gunnar Bjursell in 2007 to found a project entitled Culture and Health which has now led to the founding a new research centre at Gothenburg’s Univerisity.

“The health situation in modern western society is alarming. We have never had greater possibilities to treat sickness than we have today at the same time as we have never been sicker,” Bjursell said at the launch of the project.

“We know why this is – we become sicker by how we eat and live. We have to find a way back to a healthier life and higher state of well-being. One such way is culture and the arts,” he said.