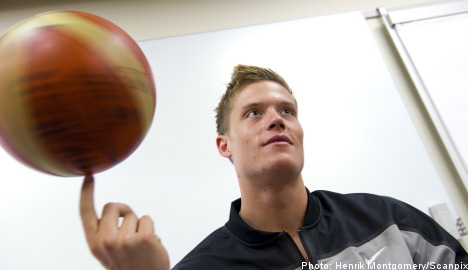 The 2.08m power forward is the first Swedish player in the league and was selected 39th in the NBA draft last year by the Detroit Pistons.

“And I had not even seen an NBA game live before,” Jerebko told news agency TT on Monday.

Jerebko will spend the summer training and playing several matches with the Swedish national team before heading back to Detroit in the fall.

Earlier this month, the native of Kinna in western Sweden was named an ambassador of Mark, his home county, which also organised a street basketball event where locals could challenge Jerebko.

Local fans will be able to cheer him on when the Swedish national men’s team takes on Estonia on August 3rd in nearby Borås.

Jerebko impressed fans and pundits alike as a rookie despite the Pistons’ dismal 2009-2010 campaign, in which they finished last in the Central Division and posted their first 50-loss season since 2001.

Jerebko has a number of dedicated fans in Detroit who form the “Jerebko Row” and was named numerous times to top rookie lists in blogs and publications such as Sports Illustrated throughout the season.

“Every time I score a point, a Viking hat is given to the spectators,” said Jerebko. “It is a popular thing.”

Despite being selected last among Detroit’s rookies, he started the most games out of the entire team, 73 out of the 82 in the regular season.

“Hopefully I’ve opened up a door and shown that it is possible,” he said.

Jerebko is not the only NBA player with a Swedish connection. Joakim Noah of the Chicago Bulls is the son of French tennis star Yannick Noah and former Miss Sweden Cécila Rohde.

Jerebko is also not the only Swede playing professional sport in the city. Nine Swedes play for the Detroit Red Wings, including captain Nicklas Lidström and alternate captain Henrik Zetterberg, and are indispensable to the NHL franchise’s success.

The Swedes on the Red Wings are known as “The Swedish Five,” referring to the players who won gold in hockey at the 2006 Winter Olympics in Torino, the “Swedish Embassy on Ice” and the “IKEA Express.”

The Wings fared better than the Pistons this season despite their recent knockout from the second round of the NHL playoffs. The team has won four Stanley Cups in nine years, last in 2008.