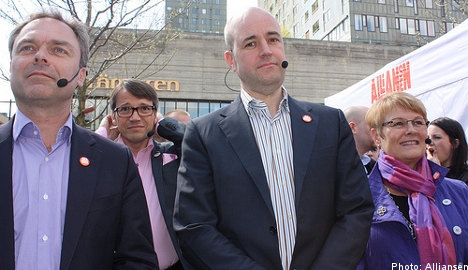 When asked “who do you think is best at dealing with severe financial crises?”, 54 percent backed the government, while only 29 percent opted for a left-green government. 16 percent replied “don’t know”.

“The government has an advantage in a crisis, it feels safer than when it is new,” said Toivo Sjörén to news agency TT, who commissioned the survey.

He believes that the conservative government could benefit if the election campaign plays out amid economic concerns.

Among Moderate Party voters, 95 percent trust the Alliance government coalition, while only 77 percent of Democratic voters believe in a left-green government’s ability to handle a crisis.

A preference for a centre-right government in a crisis was expressed by a majority of voters of both sexes, with 58 percent of men and 51 percent of women backing them respectively.

The corresponding figures for those favouring a centre-left government in a crisis, were 29 percent of men and 30 percent of women.

The Alliance government was even backed by a greater number of blue-collar workers, with 41 percent favouring them in a crisis, and 40 percent for the centre-left.

This is the first time Sifo has conducted a survey on this particular issue.

“It is the first time we have tightened up the question,” Toivo Sjörén confirmed.

Sjörén pointed out that the survey shows that left-green coalition voters appear to have less confidence in their own favoured parties than the centre-right voters have for theirs. If the election comes to be dominated by economic crisis, it is mainly the Green Party voters who might be expected to switch sides, Sjören said.

Toivo Sjörén warns though that while the survey indicates that the government is supported for its management of the financial crisis, it does not mean that it will be rewarded in the election, especially if other issues dominate – such as the environment.

“Voters look ahead, presuming that the the government has not mismanaged (its time in power),” he said.

Sifo interviewed 1000 people between May 17th to 20th and asked the question : Who do you think is better at dealing with severe economic crises? A centre-right government or a centre-left government?