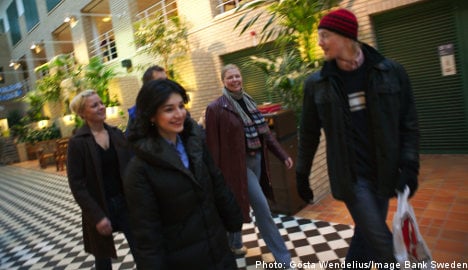 As The Local reported on Thursday, Sweden’s student loan body CSN is cracking down on students who have received funding for full time studies but who have not been studying full time.

A full-time student must obtain 60 academic points per year, which in most universities equals 30 points a term. Some colleges, like the Royal Institute of Technology, distribute their 60 points a year differently over the two terms, with 40 points completed one term and 20 the next. As far as CSN is concerned, the student has not been studying full time during the second term.

The student union at the Royal Institute of Technology estimates that 400 students have been sent letters demanding money back. Student union chairman Tobias Porserud says one student has been told to repay 23,000 kronor by May 31st.

“At first the letters the students received said that if they didn’t pay the money back before May 31st, the student loan body would be forced to notify the police. They later apologized for this, but it still absurd,” Porserud told The Local.

Peter Gudmundsson, principal at the Royal Institute of Technology, said the demands were unacceptable:

“We are trying to help the students as much as we can through a dialogue with the student loan body,” Gudmundsson told The Local.

Officials at the student loan body were unrepentant:

“We have our rules to follow, and in this aspect they clash with certain schools point systems, but our laws are set by the government and we need to follow them,” Klas Elfing, press secretary at the student loan body tells The Local.

“According to our policies the students who only complete 20 points a term, but 60 points per year, do not qualify for full time support and yes, we will be demanding money back from them,” says Elfing.

The government says it understands the students position and knows it is not their fault, but claims that there is nothing they can do about it:

“This is a case of two authorities who haven’t been communicating with each other,” Eva-Maria Byberg, spokeswoman for the minister of higher education Tobias Krantz, told The Local.

A meeting between universities and the student loan body is scheduled for the middle of June – long after many students are being required to repay the money.

Porserud says the meeting with the parties involved is set too late, when there are students who are meant to pay back their money two weeks before the meeting is even held.