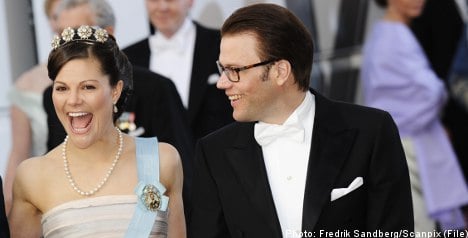 “In 10 years time, I hope we will have created a family,” Westling told the Svenska Dagbladet daily in response to a question on what he hoped his life would look like in a decade.

Asked how many small princes and princesses he’d like to raise, Westling answered: “A number, although that is not the kind of thing one can really predetermine.”

The 36-year-old luxury gym owner acknowledged he was nervous ahead of his June 19 wedding with Victoria, the 32-year-old eldest daughter of King Carl XVI Gustaf.

“When the big day come around I guess I’ll be standing there with both butterflies in my stomach and trembling knees,” Westling said, adding that since January he had been through an intense training programme aimed at preparing him for life in the royal spotlight.

“My biggest task will be to support the Crown Princess. Adjusting to that role takes time. I hope there will be understanding for the fact that the person standing here the day after the wedding will not yet be a full-fledged prince,” he said.

While there has been some speculation how a self-made, successful businessman like Westling will adapt to living in the shadow of his wife, Westling himself insisted that would not be an issue.

“I grew up in a completely gender-equal family. The idea that father knows best is not something I’m familiar with,” said Westling, who comes from a small town called Ockelbo in the centre of Sweden.

His mother is a postal worker and his father a retired social worker.

“For me, it is no problem to walk one, two or 10 steps behind Victoria and still keep my self-esteem intact,” he insisted.

Amid the massive preparations for the public event of the year in Sweden, both Westling and his bride-to-be stressed the wedding ceremony would also be a very private event, pointing out that media would only be permitted in the space behind them in church.

“Daniel and I need to have a space for just us, that is just ours,” Victoria said.

“I will not say ‘yes’ to the television cameras or the congregation. My ‘yes’ will only be directed at Daniel,” she insisted.