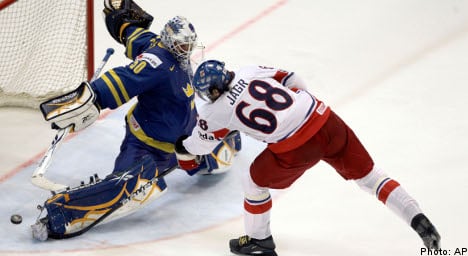 Defenders Tomas Mojzis and Karel Rachunek were both on target for the Czech Republic, while goaltender Tomas Vokoun produced 33 saves for his side’s hard-fought win.

“It was really hard to win today,” defender Miroslav Blatak said. “We left all we have at the ice. We started nervously and were penalised too often in the beginning.

“Luckily we managed to find our nerve again later to save the match in the last seconds and win in the shoot-out lottery.”

“Tomorrow it will be even harder…but we will do everything to win.”

The longstanding opponents Sweden and Czech Republic started cautiously trying to avoid unnecessary risks and seeking to pounce on their rivals’ defensive frailties.

Sweden received a 52s two-man powerplay advantage early in the first period but failed to create any serious threat to Vokoun’s net.

But they were much more productive on their next powerplay opportunity as their forward Johan Harju lifted Sweden 1-0 up sending home a rebound from Erik Karlsson’s shot from the blue line 8:29 into the match.

Andreas Engqvist put Sweden into the lead again at 31:25 sending the puck into the net from just outside the crease on Tony Mårtensson’s pass from behind the goal line.

In the third period, the Czechs were storming the Swedes’ net but Gustavsson was in command. stopping and deflecting all the pucks thrown at him.

But he was unable to stop Rachunek’s slap shot with just eight seconds to go after Czech manager Vladimir Ruzicka substituted Vokoun for the sixth field player.

In the ensuing shoot-out the Czechs duly prevailed for their second consecutive shoot-out at the tournament and a pass into the final.

In Sunday’s final Czech Republic will face reigning champions Russia, who defeated hosts Germany 2-1 in the other semi-final clash.

Sweden will line up against Germany in the bronze medal match, also on Sunday.