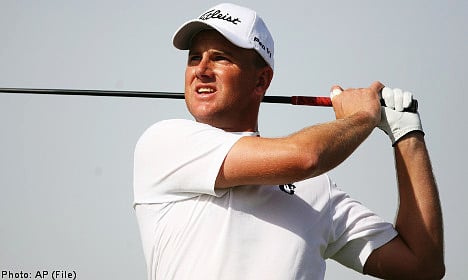 The 40-year-old Swede, three-over-par overnight after the second round, was convinced he had missed the cut and headed back home to Monaco on Friday afternoon.

He was 500 metres from his house when he learned he had made the cut and turned round without even seeing his wife, Ebba.

Karlsson flew to Paris, where the last scheduled flight to London had been cancelled, forcing him to pay $11,000 to hire a private plane early on Saturday morning from a nearby airport.

He arrived at Wentworth two hours before his tee time, after three disjointed hours of sleep, and made nine birdies to join Luke Donald, who teed off last in the afternoon, in the lead on six under par.

“I was having breakfast when (Danish professional) Soren Hansen said, ‘This trip has got 63 written all over it’,” said Karlsson.

“I was not happy on Friday night. But I felt as if I had a second chance and I wanted to go out and take it.

“My caddy said, ‘We have been invited back to this party — let’s party’.

“It is the most unexpected round of my career. It was not perfect and I was in trouble a number of times. I have played better but my putter was very, very hot.

“I have been in the situation before. You just make the cut and you can just go out and play and enjoy it — if you don’t play well, nobody cares.”

Karlsson admitted he briefly considered withdrawing when he got the text saying he had made the final two days and did not know how he was going to get to London, but the status of the tournament quickly made him return.

Luckily, his clubs were with caddy Gareth Lord, who drove back from Coventry to rejoin his employer.

He added: “Withdrawing was not an option. This is a Ryder Cup year, I am a former Ryder Cup player, and you can’t withdraw from our biggest event. That is just the way it is.”

Karlsson got to the turn in 30 and four more birdies on the back nine gave him the lowest round in the 55-year history of the championship, a new course record and equalled the lowest round shot on the European Tour this year.

He had a career-threatening eye problem last year and feared for his career until his sight was corrected by surgery and he won the Qatar Masters in February.

Elsewhere on the course South Korea’s Seung-yul Noh, out in the first group, shot a five-under-par 66 to move 50 places up the leaderboard to 13th, but no-one else could match Karlsson’s scoring over the new-look West Course.