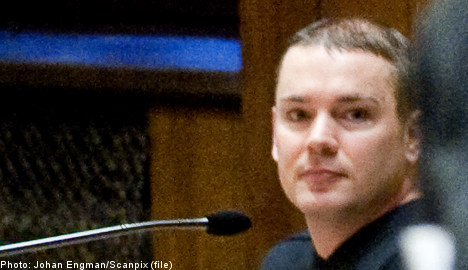 In a letter to the parliamentary ombudsman (Justitieombudsmännen – JO), Högström has claimed that he and his family have been subjected to threats and violence, arguing that he is unable to return to Sweden until “this issue is resolved.”

“[I] request that the Ombudsman investigate the circumstances surrounding why I was denied a classified national registration status,” wrote Högström. “I am suspected for the sign theft in Poland and my home and my relatives have been damaged and threatened.”

34-year-old Högström argued that he had previously submitted six medical certificates along with police documentation of 62 death threats and threatened assaults as well as other public documents supporting his application.

The former neo-Nazi furthermore alleges that the tax agency’s choice of administrator may have had some bearing on his case.

“An anti-apartheid activist who immigrated from Gambia, a man of great reputation? Eight children with different women..many born the same year every few months….,” Högström wrote asking why the original administrator was taken off his case.

He alleged that his new administrator rejected the request for a classification status on the grounds that “a public figure only has himself to blame.”

Högström also forwards claims that he had been attacked with a needle and has suffered personality changes as result, a development that he claims would never happened had he been anonymous in the register.

“Many say that my personality has changed due to what was injected into me… I received blisters, sweating, nausea, vomiting, everything is documented in the case record that was shown to the tax agency.”

Anders Högström is currently been held in custody in Poland after he was extradited from Sweden in April, two months after his arrest on a Polish warrant. A court in the southern Polish city of Krakow, where he is being questioned, ordered him to stay behind bars for at least two more months in April, Poland’s PAP news agency reported.

Högström has denied plotting the December 18th theft of the gateway sign from the site of the camp in the southern Polish city of Oswiecim, which became a notorious symbol of genocide by the occupying Nazi Germans.