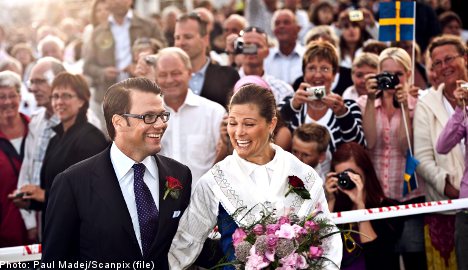 The journalists, who have been accredited by the foreign ministry, will join foreign royals, an estimated 1,000 Swedish journalists and thousands of well-wishers in celebrating the first major royal wedding in Sweden since 1973.

The news will please Sweden’s tourist and investment promotion agencies, which view the wedding as a unique opportunity to raise the country’s profile abroad.

Media interest is greatest in Germany, with 141 German journalists accredited, officials said as they announced the wedding plans at Stockholm’s Royal Palace on Monday.

The Swedish royal family has long been popular among Germans, not least because Queen Silvia was born in Heidelberg. Large numbers of journalists are also expected from Norway, with 60 accredited, Finland (46), Britain (35), Spain (35) and France (31). Somewhat surprisingly, 19 journalists are expected from Japan. Some 25 foreign television companies are accredited.

The official guest list remains a secret, although officials said 1,100 people would be seated in Storkyrkan, Stockholm’s cathedral. The guests include Swedish politicians, foreign dignitaries, diplomats and friends of the couple.

Video screens will be placed at strategic locations around the cathedral so that those attending get a good view of the bride and groom.

Lars-Göran Lönnermark, senior preacher to the royal household, said it was “not yet confirmed” that Victoria would be given away by the king. However, he argued that any decision to break with the Swedish tradition of the bride and groom entering together would “symbolize the fact that the heir to the throne must have the permission of the king and government in order to marry.”

Officials said they were expecting around 30 overnight guests at Stockholm’s Royal Palace, although it was not revealed who they would be. The monarchs of Denmark and Norway are almost certain to attend the wedding, as is President Tarja Halonen of Finland.

Britain’s Prince Charles and the Duchess of Cornwall are also likely to be among the guests, and it has already confirmed that British warship HMS Kent will be the only foreign ship to salute the royal couple from Stockholm harbour following the wedding.

Announcing plans for the wedding at a press conference on Monday, the royals’ chief of staff and wedding coordinator Håkan Pettersson said that the heir to the throne wanted the celebrations to represent “timeless tradition with a personal touch.”

Pettersson added that efforts were being made to give the couple as much personal space as possible in the context of a big state occasion. But they will not be able to escape from the pomp and circumstance for long, with the ceremony to be followed by a carriage procession around the streets of Stockholm, passing Stockholm Concert Hall, Kungsgatan, Strandvägen and ending by the Vasa Museum on Djurgården.

From there, Crown Princess Victoria and the newly minted Prince Daniel will take the Royal Barge, Vasaordern, on a tour of Stockholm harbour, where they will be saluted by the assembled warships. They will then be welcomed at the quayside by VIP guests and a massed choir.

The wedding will be followed by a reception and a dance at the Royal Palace. Carin Bergström, director of the Royal Collections, said the chandeliers on the floor below the White Sea Hall – the palace’s ballroom – had been specially secured so as to withstand the dancing from the floor above.

It was confirmed that the bride and groom would hold a private party for their own friends two days before the wedding, followed by a reception on the 18th for Swedish local government leaders and a dinner on the same day hosted by the government.