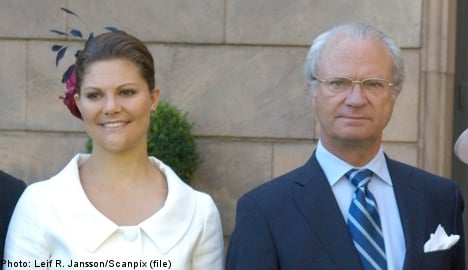 The unorthodox move has been roundly criticised by the Church of Sweden who has argued that the practice is not Swedish wedding tradition and who claimed on Monday that the matter is not yet resolved.

It is the family’s wish, according to the Royal Court spokesperson Nina Eldh.

“This is a state ceremonial event with great symbolism, not an ordinary marriage. It is Sweden’s king who is escorting the heir to the throne to the altar,” she said.

The decision, which emerged in the media last week, has led to an unlikely alliance of traditionalists and feminists in a fight against what is widely viewed in Sweden as an American tradition exported by Hollywood.

Equality-conscious Swedes are used to the couple walking side-by-side to the altar as a demonstration of their equal standing in the proceedings and in life. The Anglo-Saxon practice of “giving away” the bride from the father to the husband is widely regarded as outmoded and sexist.

But the Royal Court has rejected the Church of Sweden reasoning.

“There is nothing in the marriage ceremony or church regulations on how to walk to the altar. It is therefore up to them to decide what they want to do,” Nina Eldh said.

It is also a family tradition, Eldh pointed out.

“The king’s sister walked to the altar with grandad, as their father was no longer alive.”

The Church of Sweden remains sceptical however.

“There are a number of pastors who refuse to conduct such weddings and others who would do so. Both judge from the situation and discussions with the wedding couple,” said Ewa Almqvist, Archbishop Anders Wejryd’s press secretary.

The controversy emerged last week when the archbishop took the unusual step of issuing a statement to criticise the decision. Almqvist was on Monday unable to confirm the course of action that the archbishop, who will be conducting the royal wedding service, will follow.