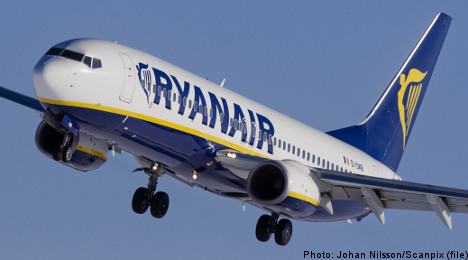 The Svea Appeals Court ruled that Rune and Eva-Marie Brännström were only entitled to the 322 kronor ($41) they had paid for their tickets, which the carrier had already reimbursed.

“Ryanair has proven that the flight was cancelled due to extraordinary

them 2,325 kronor after a 2006 flight they had been booked on from Brussels to Stockholm was cancelled due to heavy fog.

tickets, but they received no other compensation and Ryanair did not offer to

pay for their meals or hotel.

The couple said they could not wait two days and made their own way home by taxi, train and rental car, paying for the trip themselves.

The appeals court on Wednesday said Ryanair would be compensated around 300,000 kronor in trial expenses.

“I am very disappointed with the appeals court verdict,” Rune Brännström

airlines to dump their passengers. That’s just not right,” he said.

Court and even to the European Union Court of Justice.

RYANAIR
Ryanair to close base at Stockholm Skavsta Airport