Quick was convicted in six trials of the murders of eight people and claimed involvement in many more killings. But in 2008 he retracted all his confessions and put in his first request for a retrial. Last year the Court of Appeal granted him the right to a retrial for the murder in 1988 of Israeli tourist Yenon Levi.

Chief prosecutor Eva Finné had the option of either attempting to secure a fresh conviction or dropping the indictment. Quick interpreted Finné’s decision to drop the charges due to a lack of evidence as vindication for his attempts to clear his name.

“CLEARED!! I’ve been cleared of the murder of Levi – fabulous feeling and very important for the remainder of the process.”

The prosecutor’s decision in effect means that Hedemora district court’s guilty verdict is no longer valid. The district court can now turn to both Quick and the family of the murdered tourist to see if either of the parties wish to pursue the case further. For Quick, such a course of action would allow him to seek a formal verdict of not guilty in the district court.

Quick has also recently applied for the cessation of his treatment at a secure psychiatric facility. He has also called on the national welfare board’s legal council to carry out an independent investigation into his mental health with an eye to overturning a diagnosis set by the chief physician at Säter Hospital.

”This was the decision we considered most likely but you an never be sure until you get it in your hand,” said Bergwall’s lawyer Thomas Olsson. “Sture Bergwall and I are happy and relieved to have achieved our goal”.

Claes Borgström, who was Bergwall’s lawyer for the Levi murder trial, also commented on Friday’s decision.

“I can only say that, since Quick sought a retrial and claims to be innocent, it is very good and fortunate for him that the indictment has been withdrawn. He previously admitted to the crime.”

Quick has also appealed for a retrial for the murder in 1988 of Norwegian girl Therese Johannessen and has revealed plans for further appeals. But Christer van der Kwast, the prosecutor who pushed for Quick’s conviction in the Levi case, said he was disappointed by the outcome of the appeal.

“Quick was convicted on proper grounds and was granted leave to appeal on improper grounds. I think media pressure has had its part to play in the decision to backtrack,” he told news agency TT.

Falun district court said it would now attempt to contact Yenon Levi’s family in Israel to see if they wished to proceed with the case. 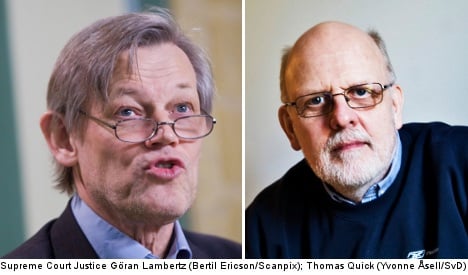 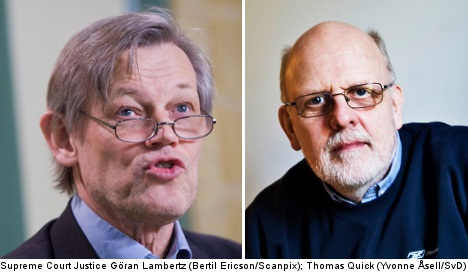