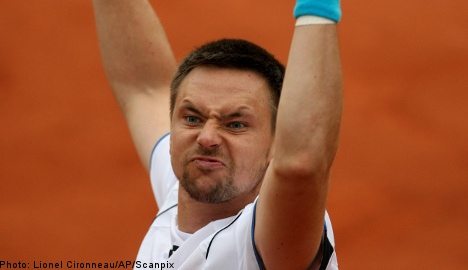 Roger Federer has enjoyed a perfect 12 wins in 12 ties with the free-swinging Swede, who he defeated in straight sets in last year’s Roland Garros final.

Söderling, no respecter of elite reputations, has been in impressive form at Roland Garros, steamrolling America’s Taylor Dent in the second round in 71 super-charged minutes and breezing past dangerous Croatian Marin Cilic in straight sets in the last 16.

“We have experience playing against each other. I’ve never lost against him, so obviously that’s a good record to have,” said Federer, who has made the last eight without dropping a set.

“But because of the improvements he’s made, he’s an opponent not to underestimate. He beat incredible players on the way to make the finals here last year, so clay seems to also become really his surface of preference.”

Söderling, the fifth seed, reached the quarter-finals with a brutal 6-4, 6-4, 6-2 demolition of Cilic.

“Söderling is a hard hitter and I want to try to get him to move. Sometimes that’s not in your control. If they play aggressive off the return and they serve well, then you play more like a hardcourt match, which I don’t mind doing,” explained Federer.

“You want to try to get these guys moving, give them different types of balls, keep them low maybe with the slice, because they have to bend more than little guys.”

Despite the official figures showing Federer leading 12-0, the Swede did at least defeat the world number one in an exhibition match in Abu Dhabi at the start of the year.

Federer insists that single loss is not relevant.

“I don’t want to downplay exhibition matches, but they’re there to try out a few things,” he said.

“That match has nothing to do with here. Conditions are way too different. We both have to go back to the drawing board and come up with a good game plan.”

Söderling too has downplayed the significance of that minor duel in the desert, but believes he can take confidence from his meetings with Federer.

“He’s the best player in the world. But even against him you will always get a few chances. Then you have to take them, because he won’t give you any second opportunities,” said the 25-year-old Swede, who was seeded 23 when he played here last year.

“I’m winning more matches when I’m not playing my best tennis, which I didn’t do so often before. That’s the biggest change to last year,” he said.

“Of course, Magnus helped me with a lot of things on and off the court, so he’s been really good for me.”