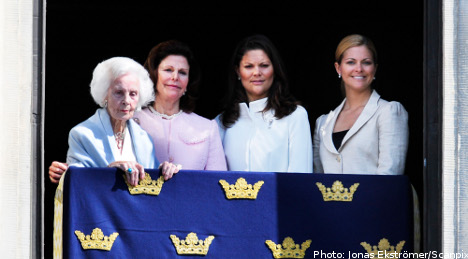 According to the doctors Lilian has Alzheimer’s and she does not feel particularly well,” said marshal of the court, Elisabeth Palmstierna, to the Aftonbladet daily.

Lilian, who was born Lillian May Davies in Swansea, Wales in 1915, has not conducted any official engagements for some time due to her deteriorating health and she is being cared for in her home on Djurgården in central Stockholm.

“Lilian is very tired and will not be coming to the wedding. She is old and frail,” Palmstierna told the newspaper.

Princess Lilian met Prince Bertil in 1943 and they became lovers soon after. Bertil chose not to marry Lilian as he did not wish to lose his place in the succession which at the time looked like it would afford him a reign as Regent after his eldest brother Gustaf Adolf died in 1947, leaving a one year-old son.

But Prince Bertil never reigned as his father lived long enough for Carl-Gustaf to come of age and he and Lilian were eventually married in December 1976. Since Prince Bertil’s death in January 1997, Lilian has continued to represent the royal family at official engagements and is currently the oldest living member of the dynasty.