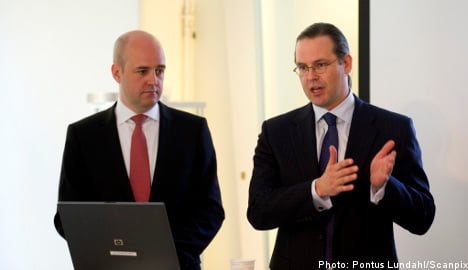 The party rejected proposals from the Centre and Liberal parties to axe the law forcing companies to run a ‘last in, first out’ policy when making redundancies. But the party did propose to increase the standard legal probation period at a job from six months to a year.

The crack in the centre-right alliance on the issue of labour law was underlined on Friday when Prime Minister Fredrik Reinfeldt and Moderate colleague, Finance Minister Anders Borg, jointly presented their party’s new policies on the issue.

The best thing for the national economy is to maintain the Swedish model of high job security, they said.

“We have examined the reform proposals and scrutinized how their outcomes. A very big change in a person’s security results in a relatively small change in GDP,” Borg said, while Reinfeldt nodded, newspaper Svenska Dagbladet reported.

As such, the Moderates would not change the current priority rules in the law relating to employment security, which both the Centre and Liberal Parties support.

Reinfeldt’s ‘New Moderates’ have been consistently careful not to pick fights with the Social Democrat-supporting unions on the issue of labour law. Reinfeldt and Borg made clear the party line will not change even if the other centre-right parties press for change.

“Safeguarding the Swedish model” was the title of the presentation Reinfeldt and Borg held for journalists on Friday at Moderate Party headquarters in Gamla Stan.

The prime minister, bolstered by new poll numbers from Demoskop showing both the Alliance ahead of the red-green coalition and the Moderates beating the Social Democrats, said the Moderates “will be well prepared” to give the other government parties a hearing.

The only shortcoming that needs attention, according to Reinfeldt, is the difficulty young people have in entering the labour market.

“Extending the probationary period has a bit more impact,” said Borg. “The point is to broaden the employability of young people.”

The Moderates also want to develop a so-called apprenticeship contract. Furthermore, the party hopes that the employers’ costs against termination disputes should be investigated and strengthen the National Mediation Office (Medlingsinstitutet).

The Social Democrats believe that the changes the Moderates now propose undermine the security of the labour market. The party’s labour market political spokesperson Sven-Erik Österberg called it “yet another attack on the Swedish model.”

“Now the government wants to extend the probationary period further, from six to 12 months. The government is deliberately increasing the gaps so that Swedish people will suffer a reduction in salary. It is the wrong way to go. Those who work need more – not less – protection,” he said in a statement. 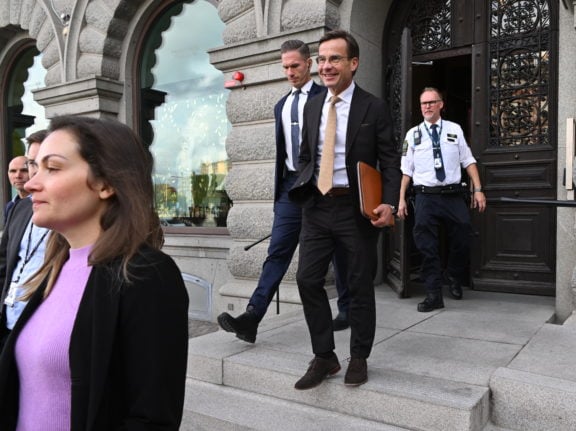 You can read the whole manifesto, This is how we bring order back to Sweden (Så får vi ordning på Sverige), here.

How will foreigners hoping to move to Sweden be affected?

It would definitely get more difficult, with the Moderates planning to reduce asylum migration “the same levels as Denmark and Norway”, which given how hard it has become to get asylum in Denmark should mean quite a substantial tightening of migration rules.

The party is promising to tighten up asylum laws to minimum level allowed under EU rules, roughly matching the proposals made by the populist Sweden Democrats on Wednesday.

The party is also pledging to abolish the current spårbyte or “track change” system, which allows those who claim asylum in Sweden and get rejected to instead apply for a work permit.

How will foreigners newly arrived in Sweden be affected?

Once foreigners have arrived in Sweden, the Moderates are proposing making it much more difficult for them to access financial support from the government.

The party is pledging to demand that newly arrived immigrants be denied unemployment payments and other benefits until they have qualified for them by working and paying a certain amount of tax.

The party also proposes to punish immigrants who fail to meet the ‘individual knowledge goals’ set by their Swedish for Immigrants (SFI) teachers by stripping away part of their benefits payments.

In the manifesto, it says that all “newly arrived” immigrants, or nyanlända, will have to go through mandatory “community orientation” or samhällsorientering, which will focus on Swedish values, with a section on LGBT rights and gender equality. Elsewhere, the party has said this is only for asylum seekers, so it may be that this does not apply to all immigrants.

Passing a test on Swedish culture and society will be essential for those applying for citizenship.

The party is also demanding that foreigners wanting to obtain a coordination number appear in person.

How will foreigners with families be affected?

Asylum seekers who come to Sweden will have to go through a mandatory process of “honour crime screening” to make sure they do not limit the freedom of or otherwise oppress family members for religious or cultural reasons.

If they do, they risk falling foul of a new crime, “illegal limiting of freedom”, which the party hopes to bring in during the next mandate period.

Foreigners with three-year-old children will have to send them for a language screening to make sure that they speak adequate Swedish, and if they don’t, the three-year-olds may be sent to a mandatory ‘language kindergarten’.

“Children who grow up in criminal clans”, will also automatically be taken into care under the party’s proposals, while the “clan members” themselves will be deported.

Foreigners with big families could also take a hit from the proposal to remove extra child benefit, flerbarnstillägg, after a family’s fourth child.

How will unemployed foreigners be affected?

Foreigners who are unemployed look likely to have a tougher time, as the Moderates propose bringing in a “welfare cap”, so that the total amount of welfare payments a person gets can never exceed what they would earn in a job.

The party also proposes allowing raids on the houses of people living on benefits “to find malpractices”.

The party also proposes a “full time activity requirement”, for anyone getting government support, meaning benefits recipients must be either studying full time, applying for jobs full time, or else carrying out useful tasks organised in their local area.

How will those living in Sweden on work permits be affected?

The party has promised to “stop talent deportations”, or kompetensutvisningar, but does not give any details over how this will be done.

How will foreigners wanting to live in Sweden permanently be affected?

The party wants to bring in language requirements for permanent residency and citizenship.

It also wants to make passing a test on Swedish culture and society mandatory for those applying for citizenship.

How will foreigners who get into trouble with the police be affected?

Anyone holding foreign citizenship in addition to or instead of Swedish citizenship risks becoming a second-class citizen under the law in the Moderates’ proposals.

The party is proposing to deport anyone with foreign citizenship who commits a crime that comes with a prison sentence.

Foreigners might want to be careful who they hang out with, as any suspected gang members who aren’t Swedish citizens will be deported, “even if they are not found guilty of a crime”.

Anyone without Swedish citizenship who commits an honour crime, presumably including the new crime of “illegal limiting of freedom”, can be deported.

The manifesto is chock full of proposals to cut taxes and help ward off the worst impact of the current cost of living crisis.

The party is promising to cut income tax, although it doesn’t say by how much, and to create a system that adds up tax rises and tax cuts to ensure that the overall tax burden does not increase over the mandate period.

Foreigners with share portfolios will benefit from the party’s proposals to cut the tax on ISK individual share accounts (Sweden’s version of an ISA).

The party is also promising to cut the price of petrol and diesel and to bring in “high cost protection” for electricity prices, meaning consumers’ electricity bills will be subsidised by the government if the power price rises above a certain level.

How might the Moderate Party help foreigners who own businesses?

The party is rather ambitiously promising to remove “three quarters of red tape and admin costs” for companies, which, if you believe it is possible, will certainly help foreign business owners.

What else do they want to do?

Here are some of the other proposals we picked out of the document: