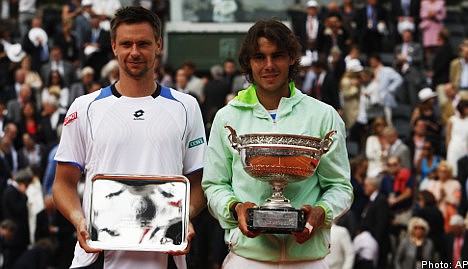 Nadal recaptured the French Open crown, gaining revenge over Söderling with a 6-4, 6-2, 6-4 win and, in so doing, he also retook the world number one spot from Roger Federer.

Nadal was simply too powerful on clay for the Swede who 12 months ago ended the Spaniard’s 31-match, four titles win streak in Paris in stunning fashion with a four sets, fourth round triumph.

The win, Nadal’s fifth here since 2005, put him second on the all-time list of French Open winners, one behind Björn Borg whose last title here came in 1981. He is now 38-1 in matches played at Roland Garros.

It was also the second time he had won the French Open title without dropping a set, having first achieved that feat in 2008.

“I played my best match against you otherwise it would have been impossible to beat you,” Nadal told Söderling on the awards podium.

In reply Söderling said: “If you continue to play like this you will surely have the chance to win many more. I will be back next year and hopefully it will be third time lucky.”

With a morning storm having chased away the sweltering temperatures that marked Saturday’s women’s final, cool, overcast conditions greeted the two men

as they stepped out onto the Philippe Chatrier centre court.

Fifth seed Söderling opened confidently with three big serves at around 220 kilometres an hour and it was the Swede who procured the first break point of the match in the third game.

He failed to convert that though, hitting a backhand long and was made to pay the price in the following game.

Söderling was in control of the rally with a second break point against him, but he mistakenly left alone a Nadal crosscourt backhand, thinking it was going out. Instead it dipped at the last second and landed just inside the baseline.

The Swede was going for broke with his sledgehammer forehand, while Nadal was content to soak up the pressure and destablize his opponent with his high bouncing, top spin shots down both flanks.

Söderling saved a further break point to close to 3-4 before Nadal also needed to save one in the following game as he stretched his lead to 5-3.

With dark clouds gathering over Roland Garros, Söderling had a total of four break points for a 2-0 lead early in the second set but, despite having Nadal on the ropes on three of those occasions, he failed to take his chances.

Once again the man from Mallorca made him pay a heavy price as he broke the Swede’s serve to love in the fifth game to lead 3-2.

The match was starting to slip away from Söderling and his confidence took another blow when Nadal broke again two games later to lead 5-2. He comfortably served out for a two sets to nil lead.

A relentless front-runner, Nadal scented victory and he moved in for the kill by capturing Söderling’s serve to open the third set.

Söderling’s last glimpse of a chance came when he had break point in the following game, but a big Nadal first serve slammed shut the door.

The Spaniard simply needed to hold serve four times to win the tournament and that he did comfortably before falling onto his back in triumph.