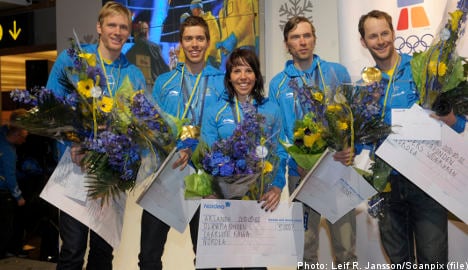 The medal, previously known as the Court Medal (Hovmedaljen), was created in 1814 and is available in two different sizes in gold and silver with chains or ribbons, as well as bells or glass. The 12th size is the largest and the medals will be awarded under eight different classifications this year.

Ten recipients will be awarded the 12th size in the Order of the Seraphim’s band (12:e storleken i serafimerordens band) medal, after having made contributions to the government, the royal court, industry, the Swedish church, the legal system, foreign service and museums.

For the 12th size in bright blue band (12:e storleken i högblått band) medal, the three winners have advanced Swedish cultural life and made contributions to sailors and boat designers and Swedish music.

For the eighth size in the Order of the Seraphim’s band (8:e storleken i storleken i serafimerordens band) media, the four winners have made contributions to enterprise and business, publishing, research and culture.

The Literris et Artibus medals will be awarded to actor-directors Helena Bergström and Gunilla Nyroos.

In addition to the Olympic champions, other recipients of the eighth size in the Order of the Seraphim’s band (8:e storleken i serafimerordens band) medal include members who have made prominent contributions to marine history, disseminating Swedish literature in the Arab world, endangered animals and contemporary art.

Others include singer Siw Malmkvist, hospital clown Viveka Olofsson and Rev. Karl-Erik Tysk, who has strengthened relations between Sweden and Gammalsvenskby in Ukraine.