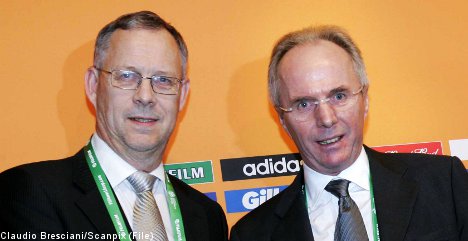 African World Cup finalists have been used in the past to having a sequence of mainly French coaches but this time round they have taken on a Swedish air with the experienced duo of Sven-Göran Eriksson and Lars Lagerbäck at the helm of Ivory Coast and Nigeria respectively.

Both Eriksson and Lagerbäck bring years of experience at the top level of European football to the job, something which was in the main lacking in coaches of previous African finalists such as French duo Philippe Troussier and Bruno Metsu.

Troussier may have acquired the moniker of the ‘white witch doctor’ yet he failed to work his magic with South Africa in the 1998 finals but the long haired and laid back Metsu did succeed as he guided Senegal to the 2002 quarter-finals.

That was the same stage at which Eriksson and England exited, as they were to four years later, but despite leaving the Mexico hotseat after an undistinguished spell in charge where they were in danger of missing out on the finals, the Ivory Coast had no hesitation in hiring the 62-year-old Swede.

The former Lazio, Fiorentina and Sampdoria coach was called up after the ‘Elephants’ underwhelming performance at the Africa Cup of Nations earlier this year and star striker Didier Drogba is in no doubt he is the man who can get them through the group stage, unlike four years ago where Frenchman Henri Michel failed to do so.

“Eriksson is one of the very best managers on the market, and has done a lot of good things with the England team,” the 32-year-old Chelsea star told the BBC World Service.

“He is a very good professional and with his experience I hope we can beat one or two of the big teams,” added Drogba, who is battling to be fit having broken his forearm in a warm-up match against Japan.

Eriksson, who guided Lazio to the 2000 Serie A title and the 1999 Cup Winners Cup trophy, will face his first test against Portugal at the finals – the team that knocked England out in a penalty shootout at the 2006 finals in the quarter-finals.

The unflappable Swede, though, didn’t remark on that irony only focusing on the present.

“The first game is very important… it’s like the final for us,” said Eriksson, who will do well to get them through to the second round with five-time champions and dark horses North Korea also in the group.

“Portugal are always difficult as they are technically very good, tactically good.”

While Eriksson faces up to surviving the ‘Group of Death’ Lagerbäck – coach of Sweden for 10 years and assistant for two years prior to that – is remarkably upbeat about his side’s chances of making it through to the second round even though it is a long time since the team justified its nom de guerre of the ‘Super Eagles’.

Their first test comes on Saturday against two-time winners Argentina.

“If we give 100 percent we can beat any team,” said the 61-year-old last week, whose side will also play Greece and South Korea.

“The ‘Super Eagles’ are ready to take on the best in the world and we know there are high expectations, especially from our supporters.

“It has been wonderful since I took over. The attitude of the players has been great and we prepared well,” added the coach who replaced Shaibu Amodu soon after Nigeria finished third at the African Nations Cup last January.

Lagerbäck’s confidence that he can work a miracle is not matched, though, by his Argentine counterpart Diego Maradona.

“I don’t think it’s a good thing to change a coach on such short notice but perhaps he (Lagerbäck) can introduce some good elements, such as set-pieces,” said Maradona.

“But it all depends on the players and he’ll have to plan his matches according to the players he has.

“But in football you need continuity and I wish him all the best but he has very little time to work on many things he should be doing as a coach.”