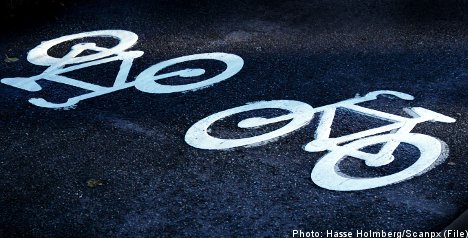 Andreas Grass, a competitive cyclist, has been charged with “travelling on a prohibited carriageway” after refusing to stick to a bicycle path in Lund in southern Sweden.

Grass was taken to task in the autumn by a motorist who waved instructions at him to move to the cycle path. But the 32-year-old stayed on the road and cycled through a roundabout. He then moved out into the middle of the roadway to avoid being overtaken on a narrow stretch of road immediately after the roundabout.

“That seemed to provoke him because he honked his horn again. In the end he chose to drive into me from behind,” he told Expressen.

Grass fell to the ground and suffered grazing to his shoulder and knee. He reported the motorist to the police for negligence and fleeing the scene. But the driver also filed a report, complaining that Grass had cycled on the road despite the fact that there was a designated path for cyclists.

When he was hit by the vehicle, Grass was just about to make a left turn on a stretch of road where the cycle track was partly closed, Expressen reports

The cyclist has no regrets over the incident and denies committing an offence. Regularly travelling at speeds of around 40 kilometres per hour, he believes it is often safest to avoid cycle tracks, which are often populated by careless pedestrians and slow-moving cyclists who forget to signal.

“It’s quite an unusual case so it’ll be interesting,” said Grass.

“He reckons he can win. The law states that cyclists should keep to the cycle track if there is one. But it also states that, if you’re careful and the road offers a shorter route, you are allowed to cycle there.”

The trial is scheduled to take place in September.