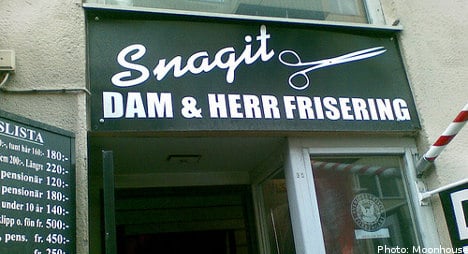 “If they are serious about free choice then they have to want it in all sectors, otherwise it is just rot,” said Lucas Lennartsson, chair of the Left Party in Sjöbo in a challenge to the Alliance coalition majority.

Furthermore Lennartsson and the Left Party don’t want to stop with a public haircutting service, releasing a long list of business sectors that they argue should be in the public sphere, such as adult education and mobility services.

The Sjöbo Left Party leader meanwhile concedes that his outburst should be seen more as a challenge to the centre-right and their “free-choice” rhetoric.

“Hopefully they can take it a little seriously and meet us halfway. Or they will just have to admit that they are just out to privatise and then we will fight them every step of the way,” Lennartsson told the newspaper.

Lennartsson underlined that the Left Party would rather that “everything” was in the public sector and returned to his hairdresser proposal.

“I believe in introducing public hairdressers in, for example, homes for the elderly, who charge what it costs and nothing more.”

“The council should not busy itself with solariums and hairdressers. That is the sort of thing that goes on in collectivized countries.”

While Lundgren defended the municipality’s privatisation drive, which he claimed provided jobs and tax revenues, he stressed that publicly-owned services would be considered “where necessary”.