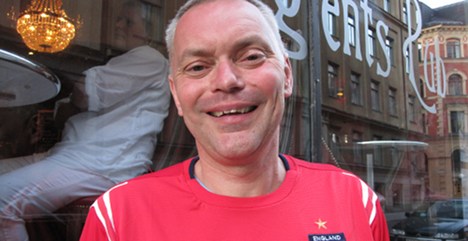 “Where is it?” asks The Grippers front man Gary Thornton. The Essex-born footie fan and Stockholm resident is enquiring as to the whereabouts of the 2010 World Cup.

As a teacher at the city’s Engelska Skolan Norr, his geography is thankfully sound. Thornton’s flights to South Africa are booked and his group tickets reserved, when I meet him shortly before the start of the tournament.

“There’s no hype for the tournament in Sweden,” he means. “It’s one of the biggest disappointments in the country not qualifying and that’s a bit sad for football fans here in general.”

Thornton has decided to create his own musical momentum by way of writing a football anthem for the occasion.

“Sing It For The Boys” is his third self-penned song and completes a hat-trick of catchy choruses. The first, “Sven’s Got the Grip” for the 2004 European Championships was in honour of the Swede who once led England’s misfortunes.

The band bounced back for the 2006 World Cup with “Barbara Windsa Stits” – a musical tribute to a number of great English icons including the song’s twin protagonists.

“I’ve had this song in my mind for a long time,” he adds. “I’m not a great fan of music but I enjoy football songs and so I thought if I can get enough people involved again we’ll go for it.”

Thornton has employed the huge vocal talent of Moneth Jansson, a former dinner lady at the school where he works. Originally from the Philipines, Jansson admits to have been converted to the song and the sport.

“I’d never heard the tune before and we play more basketball at home,” she says. “But if you ask me if I’m a football fan, well, I am now.”

Thornton roped in number of England fans he has befriended since moving to Stockholm in 1997. Fellow Gripper Adrian Pearce from Bristol has been part of the backing crew from the start. “Gary puts a lot of effort in and deserves the support,” he says. “And it’s great to have this kind of camaraderie to bring you together when you’re living away from home.”

And Swedes have been welcomed to get involved in the mix. A new addition to the latest release is “Jingle” Johan Stenström, the musical brains and producer of the track. Originally from Skåne in southern Sweden he moved to Stockholm to pursue his musical career.

At which point one would naturally ask why, with Stenström being a Swede. “Why not?” he counters. “I like England, I like the English national team. I think many of the greatest players of the world come from England and I’m a Liverpool fan. I’m not a fan of Swedish football whatsoever.”

Still, he sees his country’s absence from the World Cup as a loss. “I think it’s very unfortunate in every way,” he adds. “I don’t think the interest for football will die out but there are a lot of fans in Sweden that are probably feeling a bit neglected.”

Stenström is convinced the country will bounce back under fresh leadership and a new era for Swedish football. Meanwhile, while the nation’s attention turns to the fortunes of those with a scrap of Swedish influence.

“There will be support for teams with Swedish managers,” says Dave Meur, an Ipswich Town fan living in Stockholm who lent his vocals to the song. “Both Sven-Göran Eriksson’s Ivory Coast and Nigeria.”

Yet, it does seem slightly ironic that Swedes will be cheering for the Nigerian Super Eagles, coached by Lars Lagerbäck, the man who failed to lead Sweden to South Africa.

In a second twist of sorry fate, Swedes may well turn their attention to their Nordic cousins Denmark who added to their demise in the qualifying stages. “I read in newspaper that a lot of Swedes want Denmark to win because they’re neighbours,” Thornton says. “It wasn’t that long ago that Denmark was their biggest rival and they wanted them knocked out.”

“But the Swedes do genuinely like England too,” adds Meur. “They grew up watching English football on TV and support English club teams.”

Perhaps Thornton and Co. should instead be revelling in Sweden’s failure to make it to South Africa. At least they pose no threat to England, who hasn’t beaten Sweden since 1968. And there’s no rival anthem to boot.

“If Sweden had made it we would have been competing with Markoolio, so that’s something to be thankful for,” Thornton laughs.

“I don’t think we have any great expectations of going to number one,” he adds. “My dream is to go to an England game in South Africa and hear 50,000 singing it on the terraces – that’s better than selling a million.”

Yet, the economical impact is another reason for Sweden to lament losing its World Cup spot, according to Oxford-born Aaron Whiteman, part-time Grippers singer and full-time corporate finance worker.

“People are not going to be going out to the pubs and watching the game,” he points out. “Then there’s all the advertising rights and shirt sales missed– so there will be a huge loss.”

Indeed, with Sweden failing to make the final of the Eurovision Song Contest, this is the second big event in recent weeks that leaves the Swedish flags lowly hanging at half-mast. At least there’s the Royal Wedding to get them flying again. Unless you concur with Whiteman’s conspiracy theory.

“I think Sweden purposely didn’t get to the finals because of the wedding,” he jokes. “I heard Zlatan really wanted to attend and that’s why they didn’t make it.”

Thornton, who admits he has a victory song in the bag – just in case, has been hard at work promoting the song home from home and everywhere he goes.

“I was coming out of Gamla Stan station and saw two young lads students busking,” he says. “They were quite good so I threw in a CD for them.”

Thornton continues to demonstrate his PR work when someone calls his phone during the interview. The ringtone sounds vaguely familiar.

“Sing It For The Boys” is available to download from iTunes and the CD is on sale in various outlets in Stockholm, including the English Shop, Tudor Arms, Regent’s Pub, Wirströms, The Liffey as well as at spelapaintball.com.