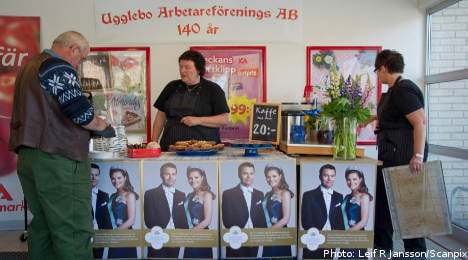 Stockholm has pulled out all the stops ahead of the big day.

Flowers and blue and yellow flags already line the streets, police officers in newly issued uniforms are patrolling the city centre, and road-blocks have been set up along the route the royal couple’s horse-drawn carriage will take through the capital.

Pictures of the happy couple’s smiling faces can be seen everywhere.

Stockholm Cathedral, where Victoria, 32, and her 36-year-old beau will be wed, has been completely revamped, as has their future residence at the Haga Palace in the Stockholm suburb of Solna.

Victoria is the daughter of King Carl XVI Gustaf, 64, and Queen Silvia, 66, and elder sister to Prince Carl Philip, 31, and Princess Madeleine, 28.

With her big brown eyes and warm smile, she has regularly topped the list of Sweden’s favourite royal.

Her engagement to Westling, a commoner and small-town boy who met the princess in 2001 when he became her personal trainer at a luxury gym he owned,

has only strengthened Swedes affection for her.

Westling’s home town of Ockelbo, three hours north of Stockholm, has allocated substantial funds to celebrate their most famous son with a street parties and celebrations to match the grand occasion.

Although tens of thousands of tourists were expected to flock to Stockholm to try to catch a glimpse of the couple on their big day, the Stockholm Visitors Board said Wednesday a number of hotels still had vacancies.

So far, fewer than expected people had arrived in the capital, it said.

The world’s media was out in force however, with some 2,000 journalists accredited to cover the wedding and Swedish public television SVT planning its largest live broadcast effort ever.

While the blanket coverage will likely be welcomed by many in Sweden, where polls show a majority of people approve of the monarchy, it has also fuelled anti-royalty sentiments.

Sweden’s Republican Association said its membership had more than doubled in the past year alone to around 6,000.

“Our phones are ringing off the hook,” Mona Abou-Jeib Broshammar who heads the association said.

“A lot of media are making a lot of money off the royal family … That’s what people say when they call us: ‘I can’t take it anymore. Things need to change.'”

But the anti-royalists remain a minority — 28 percent of the population, according to a recent poll — and many Swedes eagerly follow the details of the wedding preparations.

The list of around 500 guests invited to Saturday’s banquet has yet to be made public, but a long line of the world’s royals are expected to attend, as are several presidents and other dignitaries.

While Victoria’s wedding dress remains a closely kept secret, the Royal Court announced Wednesday she would have 10 bridesmaids and page boys, including a number of young princesses and princes.

Her father the king will walk her down the aisle, despite the fact that her decision to allow herself to be “given away” caused quite a stir. Sweden is renowned for its gender-equality where couples according to tradition walk down the aisle side-by-side.

Four days of dinners and parties in honour of Victoria and Daniel began Wednesday with a 25-course dinner aboard the East Indiaman Gothenburg: a reconstruction of a ship from the mid-18th century that figures among the world’s largest fullrigged wooden sailing vessels.

On Thursday, the couple was set to host a private dinner and party at the royal family residence at Drottningholm palace for the younger of the world’s royals.

The Swedish government will host a luxurious dinner for them and hundreds of guests on Friday.

On the big day itself, the ceremony at the Stockholm Cathedral is scheduled for 3:30 pm (1330 GMT).

Just over an hour later the newly-weds are set to wind their way through the centre of Stockholm in a horse-drawn carriage. Then they will be rowed through the Stockholm archipelago on the royal barge “Vasaorden”.

A wedding banquet hosted by King Carl XVI Gustaf and Queen Silvia at the Stockholm Royal Palace will follow.

While the wedding preparations appear to be nearing an end, betting websites have been having a field-day.

Books have been opened on everything from whether Saturday will bring rain or shine, the gender of the couple’s first-born and whether the king will say “made for each other” in his speech.