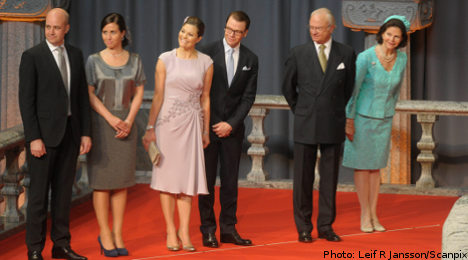 The royal couple were able to enjoy Thursday evening in the company of their personal friends at a dinner and party at Drottningholm Palace, but on Friday Crown Princess Victoria and Daniel Westling will instead be kept busy with a programme of more ceremonial state events.

While the bride, groom and Queen Silvia were rehearsing Saturday’s service at Stockholm Cathedral, King Carl XVI Gustaf and the other members of the royal family hosted a lunch for the wedding guests at Sturehof Castle.

The couple then joined the King, the Queen, members of the government, representatives of municipalities and county councils in Stockholm City Hall for a reception which will be followed by a dinner hosted by the Prime Minister and Filippa Reinfeldt at the Eric Ericsson Hall on Skeppsholmen.

The black tie dinner will then be followed by a gala performance at Stockholm City Hall hosted by the speaker of the Sweden’s parliament, the Riksdag, Per Westberg.

The concert is a gift to the royal couple from the Riksdag and will feature the cream of Sweden’s classical and popular music elite, together with the Royal Philharmonic Orchestra.

The gala performance, to be broadcast on national television, will be the final engagement the couple will attend before their marriage at 3.30pm on Saturday afternoon.