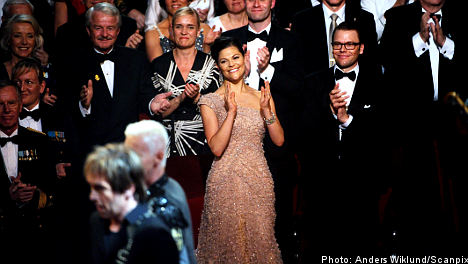 Thunder, lightning and torrential rain preceded the festivities as the Parliament put on a show in honour of the Crown Princess and her fiancé on Friday evening.

Royals mingled with politicians and heads of industry on an evening filled with laughter, music, dancing, and even the occasional tear.

The Crown Princess wore a long evening gown while Daniel Westling looked dashing in his tuxedo as the couple settled into their seats for two hours of pure entertainment.

The Royal Philharmonic Ochestra was accompanied over the course of the evening by opera singer Malena Ernman, along with popular singers Helen Sjöholm and Peter Jöback.

But the wildest applause was reserved for pop duo Roxette, as Marie Fredriksson and Per Gessle reunited on stage to perform ‘The Look’, the 1989 hit that brought the pair their international breakthrough. The group also sang together in Belgium last year but their live appearances have been very rare in recent years. Gessle remains a huge star in Sweden, where his solo performances draw sell-out crowds.

The evening concluded with a children’s choir from the Adolf Fredrik School of Music singing ‘I morr’n är det bröllopskalas’ (‘The wedding party is tomorrow’). Queen Silvia was seen to shed a few tears when two soloists walked away from the group and sang directly to the Crown Princess and her husband-to-be.