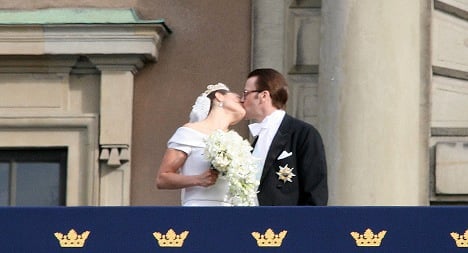 “Dear friends,” she began, “I would like to start by thanking the Swedish people for giving me my Prince.”

“We, my husband and I, are so incredibly happy and grateful that so many of you want to be here and celebrate with us.”

“It’s a huge experience. This is absolutely the greatest days of our lives so far.”

“To feel your support means more for us than you could ever believe.”

The couple married earlier in a stately ceremony in Stockholm’s Storkyrkan Cathedral, with guests including senior royals from Europe, Jordan and Japan, the presidents of Iceland and Finland and a large contingent of family and friends.

Victoria entered the church with her father, who in a compromise between the Swedish tradition that the bride walks in with the groom and the bride’s wish to be given away, accompanied her half-way up the aisle, before handing her over to her husband-to-be. She was preceded by a gaggle of bridesmaids, who included numerous daughters of friends and members of other European royal families.

In his address, Archbishop Anders Wejryd told the couple that they were facing “tasks that you can’t refuse, but that you can influence. One of you has had many years to prepare yourself to live this life – one of you has only had a few.”

Former Idol contestant Agnes Carlsson and veteran singer Björn Skifs then performed the song When you tell the World you’re mine, by Jörgen Elofsson and John Lundvik.

The couple then walked together from the church. Daniel had entered as plain Mr. Westling; he left as HRH Prince Daniel, Duke of Västergötland.

Afterwards, an estimated 500,000 people lined the streets of Stockholm to watch the couple parade past in an open carriage – more than double the number that attended the 1976 marriage of King Carl XVI Gustaf and Queen Silvia. Fears that rising republican sentiment would keep people at home – some polls have shown support for the monarchy below 50 percent – came to nothing.

They were then rowed across Stockholm’s majestic harbour on the Royal Barge, Vasaordern, a gilted 1920s replica of an original from 1744, where they were saluted by ships of the Swedish navy and British frigate HMS Kent. They were welcomed on the steps of Logården, in front of the palace, by King Carl Gustaf, Queen Silvia and Prince Daniel’s parents, father Olle, a retired social services chief and mother Ewa, a retired post office clerk.

There, they were treated to a concert from a massed choir, while thousands thronged the Norrbro bridge directly in front of the palace. The Princess and Prince were joined on the balcony by royals including King Harald and Queen Sonja of Norway, Queen Margrethe and Prince Henrik of Denmark, Queen Beatrix of the Netherlands, King Abdullah and Queen Rania of Jordan, Queen Sofia of Spain, Prince Albert of Monaco, Crown Prince Nuaruhito of Japan and Britain’s Earl and Countess of Wessex.

THE LOCAL’S PHOTO GALLERY FROM THE ROYAL WEDDING

The ceremony was followed by a banquet in the Hall of State at Stockholm’s Royal Palace. Guests were treated to a dinner including lobster from Sweden’s west coast, cod, chilled green pea soup, whitefish roe, char, poached quail egg, asparagus and beetroot from Gotland, veal sirloin from Stenhammar, strawberry mousse with rhubarb and vanilla ice cream in white chocolate, as well as a number of French wines.

Speaking at the banquet, the King addressed persistent rumours that he had previously disapproved of the match, wanting her to marry someone of higher rank:

“I am your father; you are my beloved daughter. Nobody should believe anything other than that my greatest wish is to see you happy.”

He underlined that his decision to lead Victoria to the altar was to “confirm the decision to approve the marriage.”

He added that he had learnt to know Daniel as a “very ambitious and knowledgable entrepreneur.”

The new Prince’s father, Olle Westling, gave a moving speech, in which he spoke of his son’s kidney transplant last year, in which he was the donor:

“You’ve had to learn the hard way that life isn’t a bed of roses,” he said, in a lilting northern Swedish accent.

The very modern nature of their royal romance was referred to in the speech:

“Many people see the fact that you met and fell in love as something of a fairytale. The man of the people who won the Crown Princess. Yes, it is indeed a fairytale, but I do not think it is a coincidence that this has happened here in Sweden, where The King´s motto is “For Sweden — With the Times”

The speeches were rounded off with an address by Prince Daniel himself:

Switching fluently between Swedish and English, he spoke of how, before Victoria went on an official trip to China, she spent the whole night writing:

“When I got up, I found 30 beautiful letters, addressed to me, one for each day she would be away.”

In a light touch, he alluded to the huge change in his status:

“Once upon a time, there was a young man, who while perhaps not a frog, was certainly not a prince,” he said.

“I love you Victoria, and I am proud of what we have together, and I am so happy to be your husband,” he said, causing Victoria to shed a tear.

The couple then led guests out to witness them cutting the cake in the Bernadotte Gallery, before heading into the White Sea Ballroom for the evening’s dancing. They started the dancing with an accomplished waltz, after which they were joined by the King and Queen, and by Olle and Ewa Westling – all in front of SVT’s television cameras.

The couple’s honeymoon destination is so far a well-kept secret, but when they return Prince Daniel’s induction into the world of royalty is expected to start in earnest.