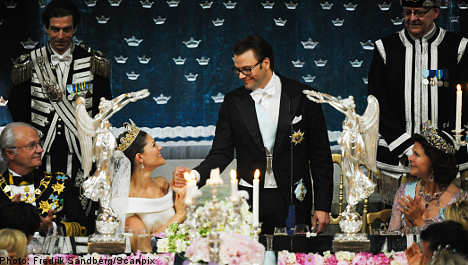 The bride’s proud parents, King Carl XVI Gustaf and Queen Silvia stayed on until long after sunrise, eventually leaving the palace at 5am.

The Crown Princess was not alone in shedding tears of joy when Prince Daniel stood up to give a speech.

“I love you, Victoria, and I am proud that we are here together, and I am so happy to be your husband.”

Switching fluently between Swedish and English, he spoke of how, before Victoria went on an official trip to China, she spent the whole night writing:

“When I got up, I found 30 beautiful letters, addressed to me, one for each day she would be away.”

In a light touch, he alluded to the huge change in his status:

“Once upon a time, there was a young man, who while perhaps not a frog, was certainly not a prince,” he said.

The couple danced a beautiful waltz in the palace ballroom and were soon joined on the floor by both sets of parents.

Outside in the mild June night, people waited in the hope of catching a glimpse of the newlyweds and their distinguished guests.

“This is the kind of thing you tell your grandchildren about. It was absolutely wonderful,” said Bernt Magnusson, one of Prince Daniel’s two main advisors, as he left the party.

“There wasn’t a dry eye in the place when Daniel gave his speech.”

HG Wessberg, secretary of state to Prime Minister Fredrik Reinfeldt, was equally impressed by the festivities.

“It was wonderful, absolutely outstanding, particularly as it was such a private moment for two people in the midst of a ceremonial state occasion

“Daniel’s speech would be hard to beat. It was so human, so intimate, and had so much warmth,” he said.

King Carl XVI Gustaf also spoke at the wedding banquet, welcoming Prince Daniel to the family and going out of his way to dispel rumours that he disapproved of the match between the two – Swedish media long claimed that he wanted her to marry someone of higher rank:

“I am your father; you are my beloved daughter. Nobody should believe anything other than that my greatest wish is to see you happy.”

He underlined that his decision to lead Victoria to the altar was to “confirm the decision to approve the marriage.”

Prince Daniel’s father, Olle Westling, also gave a moving speech. Father and son have a particularly special relationship – Mr. Westling donated one of his kidneys to his son last year.

“You’ve had to learn the hard way that life isn’t a bed of roses,” he said, in a lilting northern Swedish accent.

“As a sixteen-year-old, you discovered just how important health is. You learned that you would need a kidney transplant — and yet you still kept your positive outlook on life and your belief in the future.”

He spoke of the fact that the wedding was “a matter for the whole of the Swedish people.”

The very modern nature of their royal romance was referred to in the speech:

“Many people see the fact that you met and fell in love as something of a fairytale. The man of the people who won the Crown Princess. Yes, it is indeed a fairytale, but I do not think it is a coincidence that this has happened here in Sweden, where The King´s motto is “For Sweden — With the Times”

There were some lighter parts in the speech:

“We were very happy when Daniel met a girl and wanted to bring her home to meet the family. We hadn’t banked on it being this particular girl,” he said.

The royal guests from Norway remained at the party until 3.30am, when Crown Prince Mette-Marit and Crown Prince Haakon emerged from the palace in the company of Princess Märtha Louise and her husband Ari Behn.

At 4am, the chairman of the boards of SEB bank and Saab, Marcus Wallenberg, headed for home, as did Crown Princess Victoria’s friend Leonie Gillberg and husband Karl Johan Persson, managing director of H&M.

The King, Queen and Princess Madeleine kept the bride’s family flag flying until 5am. An hour later, guests continued to wander out of the palace, among them Roxette star Per Gessle.

It is not yet known how or when the Crown Princess and her husband slipped away from the party.