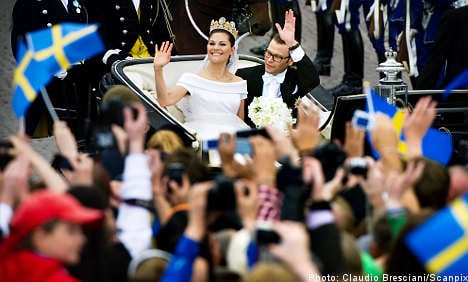 Over half a million people filled the streets of the capital amid joyous scenes along the route for the bridal couple’s carriage procession.

“It was such incredible fun. Normally when there are 2,000 police officers on duty it’s because there are football hooligans causing trouble or there’s some boring demonstration, but yesterday there were only happy and positive people.”

All went entirely according to plan, even though the number of people in floods of tears during the church ceremony caught Lindgren off guard.

“My goodness, it was absolutely fantastic,” he said, adding that he kept his own tears to himself.

“I had to be professional.”

Cathedral dean Åke Bonnier was still filled with emotion a day after the moving church ceremony.

“I’ve conducted weddings for 25 years but I have never before wed a couple who expressed their love so strongly.

“I am so glad to have been involved and to have seen the love they showered upon each other,” he said after Sunday’s packed church service at Stockholm Cathedral.

Bonnier said the wedding service had been much more personal than he could ever have imagined.

“I think it was a lot more about Daniel and Victoria than the prince and princess.”

Minister for Culture Lena Adelsohn summed up her feelings about the wedding celebrations in a single word: ”Magical!”

“It was a day when everybody was happy, almost like in a fairytale.”

The Royal Court also reflected on Saturday’s events with a sense of satisfaction.

She was especially thankful that the rain stayed away and the festivities were able to take place under relatively clear skies.

“There were also a lot of people along the cortege route and that of course contributed to a fantastic atmosphere.”

A large number of foreign tourists turned up to watch the carriage procession, with hotel bookings clearly up on the same week last year, according to Peter Lindqvist, head of Stockholm Visitors Board. He added however that it was too early to say just how many tourists had come to Sweden for the wedding.

”Hotels still had vacancies at the beginning of the week of the wedding but there may have been additional bookings since then,” he said.

Stockholm Visitors Board believes the wedding provided PR value for Sweden equivalent to one billion kronor ($130 million) as interest in the Swedish royals led to an upswing in interest for the Swedish capital from foreign media.

The celebrations concluded on Sunday with an unofficial brunch at Drottningholm Palace for any wedding guests who spent the night at the royal family’s permanent residence.